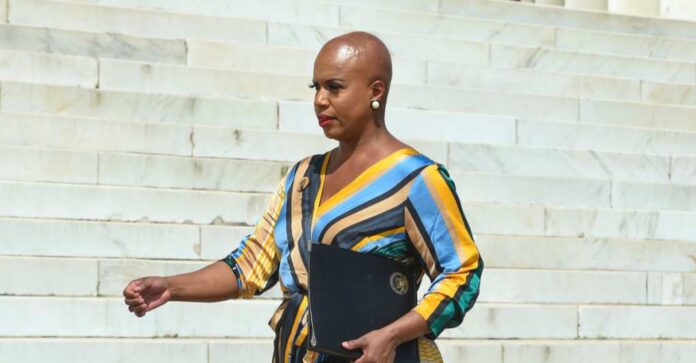 The Squad loves to spend money that isn’t theirs. They demand that billionaires pay more than anyone else. They demand that the rich hand over as much money as necessary to pay for the ridiculous ideas that they have to implement across the U.S.

One thing that The Squad has never been able to do is to offer transparency as to how the money is being spent – and how the money can make a difference in the world.

Many of the members have shown just how ridiculous their ideas are. AOC is famous for asking for money so that cows can stop farting and polluting the air. Ilhan Omar has asked for money so that more abortion clinics can be open, allowing unborn Americans to be murdered. And the rest of The Squad is just as bad.

They ask for money to be spent without worrying about whether it’s for the greater good or not. This is the same group who fought for more and more COVID relief money only for it to break the economy. And some of the spending that was issued to states wasn’t even used to provide COVID relief.

We cannot trust Squad members with any large amount of money because they don’t offer financial accountability. And, their ideas to spend it make absolutely no sense.

Oh, but wait…they promise that this time is different. They’re begging for $5 billion so that they can close the “transit equity gap.”

This kind of ask is a lot. They make it sound like the federal government isn’t already in a deficit and we’re not dealing with inflation of epic proportions. Where do they think $5 billion is going to come from? It would have to be cut from another program – and really, what program deserves to be cut in order to fund a plan created by lunatics?

As RedState identified, The Squad is “good at agitation, not legislation.”

Ayanna Pressley, Alexandria Ocasio-Cortez, Ilhan Omar, and Rashida Tlaib are some of the most outspoken and progressive Representatives that we have in Congress. Each and every time they open their mouths, they are an attack on capitalism and democracy.

Pressley is the one leading the pack to ask for $5 billion. She wants it so that public transportation can be made free. Oh, but not just free for everyone. More specifically, she wants to make sure that it is free for people of color. And she just makes up issues to help support her request.

“Black and Latinx commuters are disproportionately criminalized by fare evasion policies,” Pressley tweets as she talks about why Congress needs to pass the Freedom to Move Act. She goes on to say that it would allow “Black and brown riders the freedom to navigate their community without fear.”

There are so many issues with this one tweet that it’s hard to figure out where to start.

Second, no one is being criminalized by “fare evasion policies.” Pressley simply wants to pretty up the language of what happens when someone breaks the law by jumping onto a bus or subway without paying. There are plenty of programs in every city that will offer free or reduced-cost transportation to those who are on Welfare, Medicare, and more. People are just lazy and don’t want to apply for the programs.

And, when is Pressley going to realize that “Latinx” is insulting – study after study have shown that Latinos and Latinas don’t want that label?

Ahh, but alas – none of what Pressley or the rest of the Squad fight for are issues that their constituents want. It’s all about what they deem important, even if they have to make up issues to be angry about.

Let’s make sure that they don’t get $5 billion. If they’re really concerned about the Black and Brown riders being able to afford bus fare, they could encourage them to, you know, get a job. From what I hear, there are plenty of them out there…