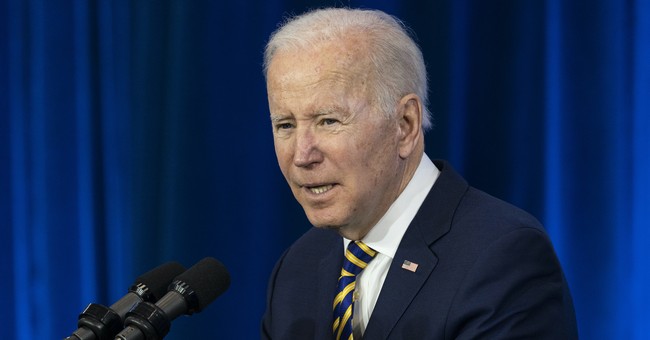 Joe Biden just dug the hole deeper for himself during a press briefing on Monday when he took some questions from the press and tried to explain the comments he had made suggesting regime change – that Vladimir Putin “cannot remain in power.”

Biden claimed he wasn’t walking any of his comments back and then he claimed to Fox’s Peter Doocy that none of the three remarks he’d made had happened.

All the remarks he made did indeed happen, as we reported here, here, and here. The White House had to walk them back or clarify, that’s another reason you know that they happened. But at this point, Biden might not be lying that he doesn’t think they happened. Biden’s mind is so muddled maybe he doesn’t even remember any more what has occurred.

There’s a huge problem created when Biden is incoherent or imprecise in what he is saying on the world stage. But now he is saying “no one believes” what he appeared to say about Putin.

So no one believes what you say? Does he think that’s a great posture to take?

The press — even the regular liberal press — is stupefied by him at this point.

Check out the face of the poor communications staffer who can’t believe that this is the guy she’s supposed to come out and defend.

A reporter then asked Biden if he cared about the political implication of what he said, what effect it might have on Putin, or the propaganda use that he could make of it? Biden showed just how clueless he was with his response by saying he didn’t care what Putin thinks, that Putin is going to do what he’s going to do.

That’s part of the problem with his policy — he doesn’t care what effect what he says will have — like lifting sanctions on Nord Stream 2. He didn’t factor in all the harmful effects that would have. If Putin is just going to “do what he’s going to do,” why impose any sanctions at all? The whole point here is supposed to be to stop the war, not make it worse. But Biden doesn’t even seem to understand what he means on sanctions either.

What happens now if Putin believes that Joe Biden just let the cat out of the bag and getting rid of him is America’s ultimate strategy here?

Putin had been throwing out signals that he might be willing to come to a negotiated settlement if he gets some of the territory he wants — like Donbas. Now, it remains to be seen if Ukraine would agree to that as an answer, especially when they are doing well and holding out so far. But when you ratchet up the rhetoric, you make the guy with a lot of nukes think that there is no off-ramp and that he has to go to the mat in this fight. French President Emanuel Macron said Biden’s comments were making his negotiating job harder.

Macron said on Sunday that he would not have used Biden’s words, adding that he saw his task as “achieving first a ceasefire and then the total withdrawal of [Russian] troops by diplomatic means”.

He told broadcaster France 3: “If we want to do that, we can’t escalate in either words or actions.”

So not only is Biden ratcheting up the situation pointlessly, but he’s also antagonizing the alliance with the dumb things he’s saying even as he claims everyone is united on approach.