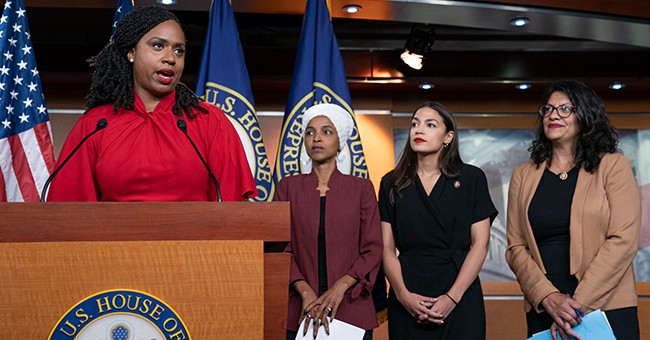 The “Squad” consists of Reps. Ayanna Pressley, Alexandria Ocasio-Cortez, Rashida Tlaib, and Ilhan Omar. They are good at agitation, not legislation.

AOC’s best-known attempt at legislation was the Green New Deal. It was notable for being greeted with mockery. Among other silly proposals, she wanted to “replace” or upgrade every building in America. I’m guessing she saw the movie “Antman,” and figured, why not shrink and replace? She reminds me of a beauty contestant who answers every question with “world peace.” She insists that everyone wants to “date” her when someone questions her smarts. Alas, she’s the smartest member of the “Squad,” so she gets the most attention. By the way, Pelosi called the Green New Deal the “Green Dream or whatever“. When you’ve lost the Wicked Witch of the West, you have no hope of passing legislation.

The rest of the Squad’s record on sponsoring and passing legislation is about the same. As a group, they make a lot of noise — not a lot of sense.

Ayanna Pressley has pretty dismal history of making a legislative impact. It might have something to do with her only having time for people in her echo chamber. For instance, Ayanna Pressley has made it clear – shut up unless you agree with her. She said:

I didn’t know that was a thing. Ironically, the people pushing it (Pressley and Senator Cory Booker) both sport Samuel L. Jackson pates. Pressley wears wigs. Booker might, but only at home.

California was the first state to ban hair discrimination, and of course, Pressley is demanding Massachusetts follow California’s lead.

Pressley now wants five billion dollars (to start) to make public transportation free, but mostly she wants it free for people of “color.” She and her staff wrote a mercifully short bill outlining what she wants. She wants to make public transit a “free ride.” Sounds expensive, but we’re just printing money, so why not print more? You can read the bill here.

Her bill proposes to “reduce the need for fare evasion policies” that “criminalize”…”people of color.” It’s in the bill. Apparently, turnstile hopping and not paying to ride a bus or commuter rail is unfair and super-racist because most of the scofflaws are “people of color? I think I’m reading that right, but you can be the judge. Pressley wants federal billions to make public transit free, because people avoiding transit fares are mostly people of color, is my reading.

The bill seeks to make “progress towards significantly closing transit equity gaps.” It might sound silly, and kinda-sorta neutral, until Pressley said the quiet part out loud:

I’m guessing that by “fear,” she means that if public transit is “free” then criminals hopping turnstiles won’t be criminalized — because it won’t be a crime and thus, criminals won’t suffer fear of being arrested? I know, convoluted.

In any event, the hair equity gap has been closed in California and for federal contracts. Maybe soon, in Massachusetts. Pressley wants you to know she’s closing the “transit equity gap,” and she seeks a measly 5 billion in federal money to do it. The next time someone hops a transit turnstile, hops on a bus without paying, and you lament that it’s a sign of “transit inequity”, know that Ayanna Pressley, plank member of the squad, is closing the transit equity gap.