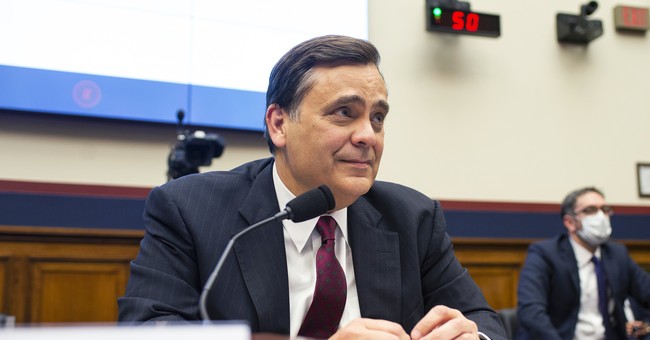 I’ve written about the ridiculous push on the left calling for the impeachment of Supreme Court Justice Clarence Thomas because his wife Ginni Thomas had an opinion they consider bad about the 2020 election, and that she shared it in texts with then-White House Chief of Staff Mark Meadows.

Now stay with me a second, while I explain the manic claim. She wanted Meadows to look into some of the questions that were being raised about the election, according to the alleged texts. She didn’t encourage him to do anything illegal, and she was nowhere near the riot at the Capitol on Jan. 6, 2020. But that hasn’t stopped the left from slandering her and accusing her of trying to overthrow the country.

The second part of the story is that in January, the Supreme Court decided against Trump’s claim of privilege regarding White House messages and emails, 8-1, with Thomas being the one “no” vote. So according to the left’s scenario, Thomas should be impeached because he dared to vote in the case.

Yes, I know it doesn’t make a lot of sense. It didn’t stop people like Rep. Ilhan Omar (D-MN), former Sen. Barbara Boxer, and MSNBC’s Mehdi Hassan from saying he should be impeached. They’re desperate to find a way to get him out, while Democrats still hold control in Congress. They don’t even care if they’re pushing this insanity while he was in the hospital with an infection. Fortunately, he is now out of the hospital and on the mend.

But George Washington University law professor Jonathan Turley is right with me on how ridiculous this claim is, and he nuked the leftist effort to push impeachment.

Turley observes that the scope of the effort to grab any messages that have to do with challenging the election or the rally on Jan. 6 has been called overbroad, and I would agree because neither the challenges nor the rally are illegal. Nor do they have anything to do with the riot — the alleged point of the Committee’s investigation. Congress then leaked the messages to the media, and the smear against Ginni Thomas was off to the races. Of course, the purpose of the whole exercise is not truth or illegality, but attacking Republicans.

First, Turley notes that conflict rules in the Code of Judicial Conduct have not been mandated by Congress, and have been viewed as discretionary by the court. Second, there wasn’t anything that Ginni Thomas did that put her in “legal peril,” he noted, and it wasn’t clear that there was any kind of a violation of that conflict rule, to begin with. Third, Meadows had already turned over the messages in question to the Jan. 6 Committee before the case was decided. So, Thomas’ decision effectively had nothing whatever to do with the messages in question. Finally, even if there had been an “appearance” of a conflict (and there wasn’t), such a thing still wouldn’t rise to the level of an impeachable offense.

Turley also makes another great point that we’ve made before about the Democrats’ hypocrisy over questions about the election. He noted how Boxer had been behind organizing a challenge to the certification of George W. Bush’s victory in January 2005, and that House Speaker Nancy Pelosi (D-CA) and other Democrats were supportive. They claimed that Bush stole the election.

Indeed, many who are condemning the challenge today heaped praise on Boxer. Speaker Nancy Pelosi praised Boxer’s challenge as “witnessing Democracy at work. This isn’t as some of our Republican colleagues have referred to it, sadly, as frivolous. This debate is fundamental to our democracy.”

That act so “fundamental to our democracy” is now being cited as evidence that Ginni Thomas is potentially liable for her advocacy with the White House. Nothing in these messages supports such liability. Absent additional evidence (which has notably not been leaked), these messages show a spouse of a justice engaged in protected political speech.

None of that matters, of course. Women’s March Executive Director Rachel O’ Leary Carmona who called for impeachment and declared that “the revelations that Ginni Thomas advocated for the overthrow of our democracy are disqualifying — not just for her … but for her husband. He is hopelessly compromised, conflicted and corrupt, and he must be impeached immediately.”

As Turley notes, they are attacking Ginni Thomas for the same things Democrats have done in the past. Can we also talk about the Democrats’ involvement in casting doubt on the 2016 election for the past several years?

Moreover, even if Ginni Thomas had done something, she’s a separate entity from her husband. What does it say about the Democrats, that they don’t seem to think so? That they think her husband would somehow be responsible for something she would have done?

The calls for the impeachment of Justice Thomas are ludicrous but there is nothing laughable about the impeachment addiction fueling this frenzy. People of good faith can disagree on the need of Thomas to recuse himself from certain Commission-related cases. However, impeaching Thomas based on these grounds would expose all justices to the threat of politically motivated impeachments as majorities shift in Congress. That is precisely what the Framers sought to avoid under our Constitution.

I would further note that these are the same Democrats who continually say “Hunter Biden is not in government,” so what potential conflicts/crimes he might be involved in don’t matter, but who are now saying that Ginni Thomas’ political opinion is now something to nail her husband with. Talk about hypocrisy.