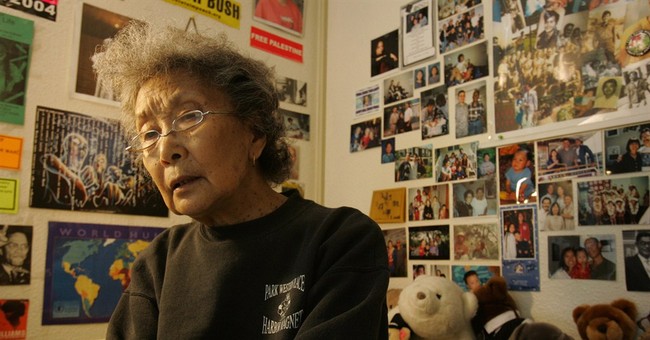 It seems that a day doesn’t go by without the left-wing flying monkeys of the Biden administration saying or posting something to purposely dump on America — just to remind us what a flawed country we are.

From consistently painting America as an inherently and systemically racist to a country full of white misogynists hellbent on trampling the rights of women, it’s as if the United States of America is barely one step up from hell on earth — if that.

Yuri Kochiyama was a Japanese American political and civil rights activist. During WWII the U.S. Government forcibly removed her and her family to an incarceration site [that would be “internment camp,” following the attack on Pearl Harbor]. for Japanese Americans.

For fifty years, Kochiyama spoke out about oppressive institutions and injustice in the United States. Her activism supported the liberation and empowerment of African Americans, Asian Americans, and Puerto Ricans.

First, the requisite disclaimer: While the treatment of patriotic Japanese Americans during WWII was in some instances abhorrent, the above is a classic example of the left interpreting history in today’s context.

Kochiyama was a Japanese-American activist for communism and racial equality during the 20th century. … [S]he also championed Chairman Mao’s Great Leap Forward and was an advocate for terrorists.

The WHAANHPI honored Kochiyama’s “political and civil rights” work but backed away from mentioning her support for bin Laden.

And a few choice quotes from Kochiyama, as transcribed by Fox:

“I consider Usama bin Laden as one of the people that I admire. To me, he is in the category of Malcolm X, Che Guevara, Patrice Lumumba, Fidel Castro.”

Kochiyama said after the terrorist attacks of Sept. 11, 2001: “I thank Islam for bin Laden. America’s greed, aggressiveness and self-righteous arrogance must be stopped. War and weaponry must be abolished.”

During the same interview — just two years after 9/11 — Kochiyama again sang the praises of bin Laden:

Fox further noted Kochiyama’s embrace of the infamous Peruvian revolutionary organization Shining Path, a 1970s Maoist terrorist cell, led by former philosophy professor Abimael Guzman, that killed at least 24,000 people over the course of 12 years in its brutal campaign to overthrow the Peruvian government in a communist revolution. She once told the group:

What has been taking place in both Peru and the U.S. is a serious campaign to discredit Guzman and the Shining Path movement, tainting them as terrorists, undermining their struggle with lies, isolating them, and intimidating anyone who might support them.

Now that I’ve given you a sense of the Complete Yuri Kochiyama, here, in part, is the White House proclamation honoring her:

Every March, Women’s History Month provides an opportunity to honor the generations of trailblazing women and girls who have built our Nation, shaped our progress, and strengthened our character as a people.

Standing on the shoulders of the heroines who came before them, today’s women and girls continue to carry forward the mission of ensuring our daughters have the same opportunities as our sons.

This Women’s History Month, as we reflect on the achievements of women and girls across the centuries and pay tribute to the pioneers who paved the way, let us recommit to the fight and help realize the deeply American vision of a more equal society where every person has a shot at pursuing the American dream.

“Women and girls who have built our nation.”

“Standing on the shoulders of the heroines who came before them.”

Women’s History Month is an opportunity to honor the legacy, the vision, and the achievements of trailblazing women and girls who’ve built, shaped, and strengthened the character — the very character of this nation.

And this line of crap couldn’t have been more ironic on multiple levels:

And today I’m honored to be with some of the world’s greatest soccer players who happen to be women — (applause) — the U.S. Women’s National Team, both past, and present.

Please — if I can ask you, come up on the stage. I was going to have them stand, but if they stood, you couldn’t see them anyway because everyone else is standing. This is — they’ve won World Cups, the Olympics Gold Medal…

“Who happen to be women”?

I didn’t even know Joe Biden was a biologist. Then again, Lia Thomas strenuously begged to differ.

Honoring anyone like Yuri Kochiyama — female, male, whatever — at the highest level of the U.S. government is deeply offensive to patriotic, freedom-loving Americans everywhere — men and women. From the families who lost loved ones on 9/11 to, and most disgustingly, the true American heroes we honor on Women’s History Month.

Then again, Trump Jr. nailed it:

Incidentally, counting today, there are six days left for Biden to honor six more distinguished, American women in celebration of Women’s History Month. After careful consideration and taking all factors into account, I humbly submit the following nominees for consideration.