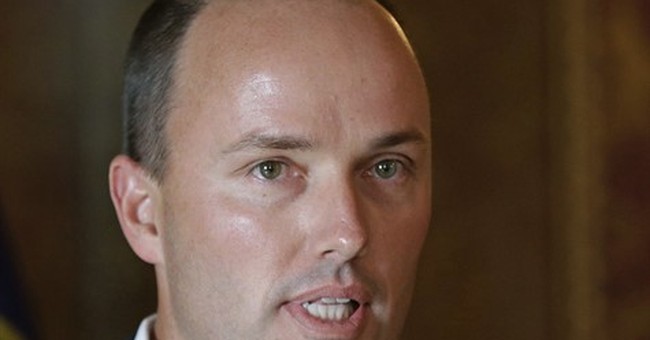 Some weeks ago, Utah Gov. Spencer Cox announced that he would veto a bill making its way through the legislature that would bar males from competing against females in womens’ sports. The bill itself is hardly a controversial idea in Republican (and independent) circles, and Utah is one of the reddest states in the nation.

Cox is your consummate establishmentarian politician, though, so it was no surprise when he responded (per Fox News) by claiming it was the “right” thing to make sure girls could get dominated by boys in sports. After all, this is the same guy who called for bipartisanship during the 2020 election and also recently expressed his opposition to a school choice bill because he wanted to keep taxpayer money coming into public schools to pay teachers more.

In a statement regarding his veto of H.B. 11, titled Student Eligibility in Interscholastic Activities, Cox said that while “politically, it would be much easier and better for me to simply sign the bill,” he vetoed it because he “tried to do what I feel is the right thing regardless of the consequences.”

Here’s the thing about this kind of mindless virtue signaling. Doing what’s right requires actually being right. You get no brownie points for standing athwart those trying to do something objectively just, and protecting girls is objectively just. But Cox would rather preen for The Washington Post than dare stand up on an issue that might bring a little heat.

Then there’s stuff like this, which makes me want to ram my head into a wall.

I guess Mike Winder believes that if he throws in a buzz phrase like “fiscal conservative,” Republicans will just nod along? I can’t think of anything more cowardly in the political realm than for an elected official to say they aren’t going to protect girls because the state might lose a lawsuit or not get to host a college swim meet. Unfortunately, the GOP is still riddled with many spineless wonders like Winder, hiding on the state level, hoping you won’t notice them and that they never have to support something CNN wouldn’t approve of.

Thankfully, most of the rest of Utah’s legislature was actually willing to stand up and be counted. They voted to override the veto in both the House and Senate by wide margins.

The Utah Legislature voted Friday to override Republican Gov. Spencer Cox’s veto of a measure that would prevent transgender girls from participating in female sports in schools across the state.

In a 56-18 vote with a supermajority needed, the Republican-controlled House first voted to override Cox’s veto. Shortly after, the Senate gave final approval to override the veto by a vote of 21-8.

I know Utah has a knack for elected squishes to high office (see: Mitt Romney), but the Republican voters there, however meek they may prefer to be, should probably ask themselves what’s sustainable. Because having elected officials who are going to continue to surrender the culture wars in this day and age is not sustainable. The left will overtake everything if they are allowed to. Think about it.