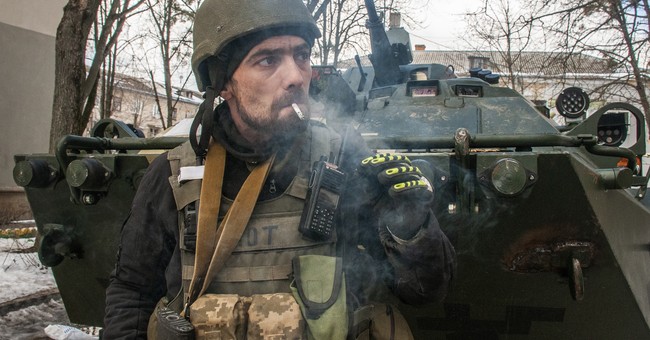 There’s a report out of Ukraine that – if true – shows just what difficulty the Russians are in with their war in Ukraine and just how unhappy some of their troops may be about how things are going.

According to Ukrainian and Western sources, a Russian commander of the 37th motor rifle brigade – Col. Yuri Medvedev – was run over by his troops in Ukraine.

The official said of Colonel Medvedev: ‘He was killed by his own troops we believe as a consequence of the scale of losses that had been taken by his brigade,’ they added. ‘That gives an insight into some of the morale challenges the Russian forces are having.’

The official added that the colonel appeared to have been run down using a tank. ‘We believe he was killed by his own troops deliberately,’ they said.

According to Ukrainian journalist Roman Tsimbalyuk, a Russian soldier behind the wheel of the tank blamed Medvedev for the deaths of his friends. Tsimbalyuk said that the unit had lost about half its strength due to death or injury. “Having waited for the right moment, during battle, he [the Russian soldier] ran over the commander with a tank as he stood next to him, injuring both his legs,” Tsimbalyuk explained. He said that the injured officer had been taken to a hospital in Belarus.

While the Russians didn’t confirm the incident, Chechen leader Ramzan Kadyrov (who is helping Putin in the war) released video allegedly showing a wounded Medvedev being taken to a hospital.

Then, it was announced on Friday that he had died.

Now, we do note that it’s a report, which hasn’t been confirmed.

The Russians have suffered massive losses in the field. As my colleague Streiff reported earlier, the Russians released an official count on Friday of 5,201 killed, although that number is likely false. NATO estimated this week that the number was more likely between 7,000 and 15,000.

On Tuesday, I reported how a Russian party paper, Komsomolskaya Pravda, published a casualty account citing the Russian Ministry of Defense; they put the number at close to 9,861 — before they retracted it, saying they were “hacked.”

Russia has also had a lot of their higher military officials taken out, as my colleague Andrew Malcolm has detailed. Now, there’s yet another one – Lt. Gen. Yakov Rezantsev.

Resantsev was killed at the Chornobayevka (the tweet had it spelled wrong) airfield near Kherson. He’s the second, two-star General killed in Ukraine.

There are also reports that 20 of the 120 battalions that Putin put together for the war have been rendered inoperative. That’s an incredible response from Ukraine, and just buttresses why the Russian troops have to be feeling so demoralized.