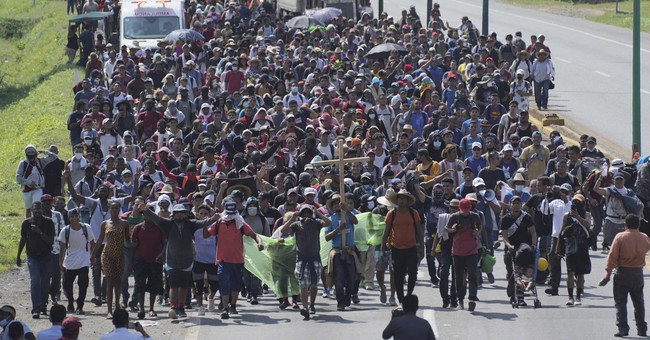 In this episode of “The Most Trusted Name in News”…

Let me first just get this out of the way. If there’s a smugger, more condescending anchor on CNN than Brianna Keilar — and I realize the bench is deep — I have yet to see him or her. There. Now I feel “better.”

As CNN itself reported on Friday, the Biden Border Crisis will bring another record-breaking surge of illegal aliens to the US-Mexico border this spring, alarming officials who are now rushing to build more facilities and lining up prison buses to help accommodate the new arrivals.

Hang on. I have a suggestion. Stop them at the border, and send them the hell home.

Anyway, U.S. Border Patrol chief Raul Ortiz told CNN in an exclusive interview his agency is getting ready to apprehend as many as 8,000 illegals daily — more than double the daily number of the 2019 surge under the Trump administration. While Border Patrol-at times-apprehended 8,000 migrants daily, the number has never been the norm.

That staggering number “will probably become the norm over the next 30 to 45 days,” Ortiz said. As CNN noted, there have already been more than 940,000 arrests this fiscal year, which started in October 2021. Worse, Ortiz told CNN, he is already “managing a flow that’s significant,” and that the influx is “going to put additional strain” on his resources and agents.

Fast-forward to Brianna Keilar, co-anchor of CNN’s “New Day,” who, my guess is, did her best to pretend she was shocked by Ortiz’s predictions — given that she’s undoubtedly been aware of the never-ending Biden Border Crisis and related numbers of illegals flowing into America from the outset.

Here’s Keilar, as transcribed by The Blaze.

U.S. officials are scrambling to prepare for a record-breaking surge of migrants attempting to cross the U.S.-Mexico border this spring. In a CNN exclusive interview, the chief of Border Patrol says he is bracing for a staggering 8,000 apprehensions a day.

“That is a huge number,” she exclaimed.

One wonders when numbers are “huge” in Ms. Keilar’s eyes and when they are not.

As we reported in January, 170,191 illegals were apprehended in December — 4,400 more than in the previous month and a record over the next highest December by 100,000. That is, December apprehensions were 140 percent more than the previous record December, and were running at a pace 4.4 times the historical average for the month. Worse, Biden and his administration have all but ignored the continuing crisis.

So there’s a couple reasons why the concern is right now: number one, typically, border arrests go up in the warmer months and we’re heading into the spring so we’re already starting to see that happen. [And Biden’s in the White House.]

Number two, we are waiting for a decision on a Trump-era pandemic emergency rule. [Nonsense. Biden’s in the White House,]

What that rule did is allow authorities to turn people away at the border. We are waiting next week for a CDC decision whether that stays in effect. [Wait — Biden pledged throughout the 2020 primaries to, in effect, open the border. And Biden’s in the White House.]

If it doesn’t, that means we go back to the traditional protocols, which would be releasing migrants, sometimes monitoring them when that happens, detaining them, or removing them if they don’t have an asylum claim. [Because Biden’s in the White House.]

But that takes processing, that takes time. [Did I mention Biden’s in the White House?]

The only reason the lapdog media is beginning to change its water-carrying tune about the ongoing border crisis is the same reason it changed its tune on COVID-19: Polls.

As we reported in February, even an internal Democrat Congressional Campaign Committee poll found that Democrats are likely to get their asses handed to them in the 2022 midterms — principally over Biden’s disastrous policies and purposely self-created crises.

In the meantime, The Most Trusted Name in News continues to alternately find itself eating crow and sucking mud in the ratings.