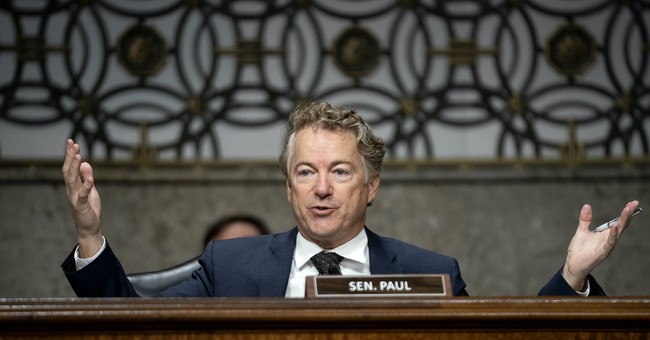 We were blessedly free from Dr. Anthony Fauci for a time, but if there’s still something to be gained off COVID-19 panic, you can be the King of the Coronavirus will be there to push a little panic.

Thankfully, it would appear that the American people aren’t having it, but moreover, neither is Kentucky Sen. Rand Paul. The libertarian-conservative has been the biggest thorn in Fauci’s side for some time, and consistently calls out the doctor’s inconsistencies and unscientific conclusions.

As such, when Fauci appeared to say that COVID restrictions will make a return due to yet another variant gaining traction across the country, Paul told Fox News that no one needs to panic.

“The thing is if you believe in Dr. Fauci, what you should do immediately is go get stickers and make sure they are on the floor, and a yardstick so you know you are 6 feet away from people,” said Paul. “And Plexiglas – carry Plexiglas around with you because Dr. Fauci thinks it somehow, you know, reflects the virus away from you. None of what he has been for has worked – not one thing he has advocated, other than the vaccine, and I’m not against the vaccine.”

Paul then pointed out something Fauci seems to leave out when discussing immunity to this virus.

“But the interesting thing is – and he won’t admit this to the public – if you take a sample of blood from 1,000 people in the United States, and you measure to see if they had antibodies to the virus or antibodies to the vaccine, it’s over 95%,” said Paul.

“That’s why we are doing better with this,” he continued. “We have developed immunity either from having the disease or being vaccinated, and that’s why we are doing better, in addition to the fact that the virus has mutated to a less virulent or less deadly form. But he won’t admit it because he’s so caught up in putting stickers on your floor, putting masks on your face, putting goggles on you.”

“The guy is a menace, and he has not been right really about anything since the start of this,” noted Paul.

In January, Paul had hit Fauci during a hearing where he highlighted that Fauci had conspired with Dr. Francis Collins to do a “quick and devastating takedown” of prominent epidemiologists from various Universities including Harvard and Oxford, smearing them as “fringe” thinkers. Paul went right for Fauci’s exorbitant pay, asking if he thought his $420k salary was appropriate to use for attacking dissenting scientists.

(READ: Rand Paul Ends Fauci With a Pic for the Ages, as Dems Try to Save Him)

Fauci would more or less disappear from the public view for a while, reappearing only recently to one again spread unnecessary fear. It would appear, however, that wherever Fauci pops up, Paul will be there with a metaphoric mallet to smack him back down.