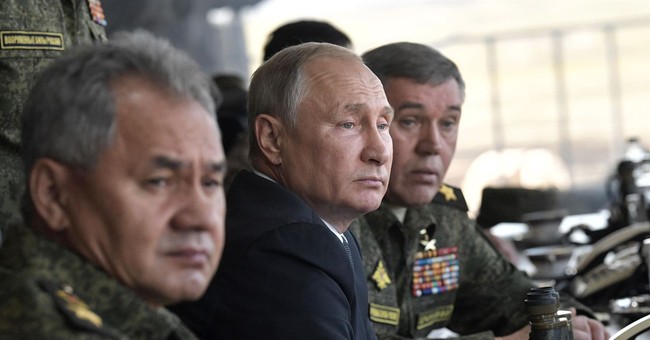 By now, even the most hardened Russophile has to wonder if the Russian invasion of Ukraine, which celebrates one month of hostilities today, is really going according to anything that appears to be a plan. But, propaganda aside, the maps of the war speak to themselves. The frontlines have been stable for about two weeks with only minor changes. This can either be due to the Russian operation reaching its culmination point (Russia’s Invasion of Ukraine Reaches Its Culmination Point and Zelensky Plays Hardball in the Peace Negotiations) or because Russia had decided it doesn’t want to move any further and is happy to hold ground and reduce Ukrainian cities to rubble.

Regardless of your views of the state of play in the military campaign, it is really difficult to deny that ferment is taking place in the Kremlin. In the past couple of weeks, we’ve had solid but unconfirmed reports that Putin has relieved at least eight general officers of their commands; two senior FSB officers have been arrested, allegedly over the intelligence that supported the operational plan for the Ukraine invasion (see Trouble in Paradise: Putin Arrests Senior FSB Officers Over Ukraine Fiasco); and the deputy director of Rosgvardiya, or Putin’s personal military force, has been arrested (see Top General in Putin’s Personal Army Is Arrested by FSB). The latter two events were announced in Russian media.

Now we have some additional data points. Russian Defense Minister Sergei Shoigu, a Putin crony, has not been seen in person since March 11.

In a lengthy post on the messaging service app, Agentstvo reported that Channel One aired a story on March 18 about Shoigu presenting at an awards show that day. However, the photo used to illustrate the story allegedly came from a video posted on Russia’s Ministry of Defense website on March 11.

Shoigu was mentioned on the Kremlin’s website on March 18 in a passage about Putin meeting with members of his Security Council to discuss the ongoing conflict in Ukraine. While Shoigu was reported to be present at the meeting, no pictures or video of him were published on the site.

Shoigu, 66, is said not to have been seen with Putin since he attended a meeting with the Russian president and chief of the general staff Valery Gerasimov in Moscow on February 27, just days after the Ukraine invasion began.

Shoigu’s profile on the Ministry of Defense website has also not been updated since March 11.

Perhaps related, perhaps not, before the war, Shoigu was accused of corruption on a massive scale, but his relationship with Putin made him bulletproof. It is rumored that Shoigu has a “heart condition.”

Another face awaiting its own personal milk carton is that of Chief for the General Staff Valery Gerasimov. Like Shoigu, Gerasimov has not been seen in public since March 11, when he met with his Turkish counterpart. Ukrainian media hyped a story that Gerasimov was fired as early as February 25, but that doesn’t seem to be true as images of him in proximity to Putin appeared after those stories.

For the time being, Shoigu and Gerasimov dropping out of sight are mere data points. They could very well reappear in the future with reasonable explanations for their absences. However, if they have been removed from their posts, we are dealing with a different scenario. What we can’t know is the reason for the spate of dismissals, if they are all true. There is no doubt that there is some scapegoating going on. But if Putin has pushed the ejection button for the Defense Minister he appointed a decade ago while the nation is embroiled in an increasingly wasteful war, I think we have to look beyond mere incompetence for an explanation.