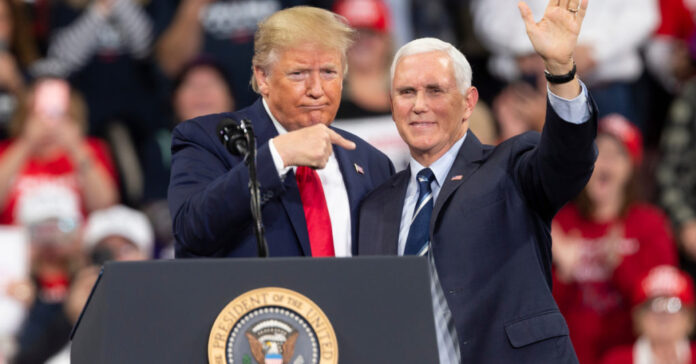 2024 is a year that is coming quickly, and the Democrats are scared to death. They know that they have royally screwed up running the country. Old Joe Biden has not panned out to be the leader he portrayed himself. And they certainly know that there is not a person within their party that can stand up to and against the influential Republicans who want to serve the people and make America great.

The Republican Party is already forming its elite to run for the Oval Office in 2024. Donald Trump is looking at a spot and many others that far outperform every liberal Democrat in America. Donald Trump is one of the strongest candidates who are ready to compete. And he has already determined that to win an election, past mistakes cannot be present on his record.

Mike Pence was the perfect choice for his running mate in 2016. It gave the balance that was needed for the White House. But some things happened that the media blew out of proportion that could potentially cause issues if Pence were to run with Trump again in 2024. Both men are wise enough to know that it would not be a good idea.

MSNBC reported that the Washington Examiner stated, “Former President Donald Trump is effectively ruling out tapping former Vice President Mike Pence as his running mate should he mount a third White House bid in 2024 and win the Republican nomination. ‘I don’t think the people would accept it,’ Trump told the Washington Examiner Tuesday evening during a wide-ranging telephone interview from Mar-a-Lago, his private social club and political headquarters in Palm Beach, Florida.”

Pence and Trump were the perfect duos to take on the nasty Democrats in Washington and help a country survive the pandemic. But the times are different. And while they still get along just fine, they have to think that it may not work the next time around. The media may claim that the two are fighting, but the truth is that it is just wisdom working out what would be better for the country.

The Democrats think of what they can get out of the moment into an election period. Republicans see an election as to how they can serve the people. And that is the difference between people who serve their country and those who want to control the country. The Democrats are all about control, which is a foreign concept in the Constitution.

The media wants to spin the January 6 election certification as something that splits the two down the middle. Liberals tried to spin Pence’s actions as being in defiance of Trump, but all he was doing was his job. If certification were to be delayed, Congress would have seen the delay. Pence did his job, and Trump knew it.

The liberals have tried to mix up the facts with how MSNBC reported that “Pence didn’t want to prioritize the rule of law; he was prepared to succumb to presidential pressure, and he actively explored ways to corrupt the process. The Hoosier was prepared to do the wrong thing; he just couldn’t find a credible way to pull it off. Pence grudgingly did his duty only after concluding he didn’t have a choice.”

The only choice Pence had was to do his job or not. The people who had issues with the voting results did speak up, and it was determined that it was not warranted to delay the certification. But that was always an option. Just not for Pence without the proper process being followed.

Americans may not have liked the decisions that were made that day. But they had to be made and given a choice based on the evidence, people did what had to be done. The nasty Democrats would love people to believe the two are not running together because they are fighting. But truth be told, they wisely have concluded that it does not form the team that can win the White House. For the Republican Party, it is not about what they get out of it. Instead, ur;a how they best can serve the people. And an appearance of a divided White House is not going to be good for the country.