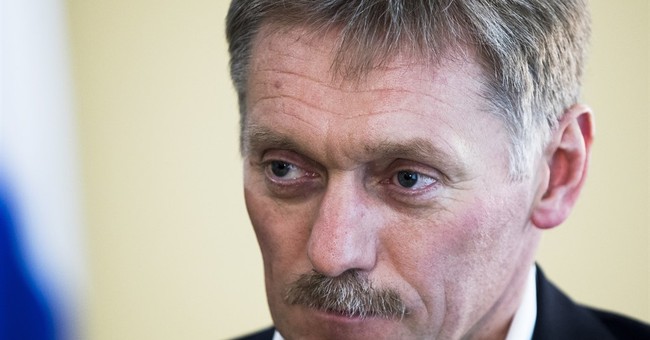 Russian President Vladimir Putin’s spokescritter Dmitry “dig my porn-stache” Peskov appeared on the little-watched CNN show hosted by Christiane Amanpour. The big message that Peskov seemed to try to get across to Amanpour’s audience was that Russia is perfectly willing to use nukes to get its way.

Speaking to CNN, Peskov refused to rule out the use of nuclear weapons.

“We have a concept of domestic security and, well, it’s public, you can read all the reasons for nuclear arms to be used,” he said. “If it is an existential threat for our country, then it can be used.”

According to a 2020 statement on Russia’s nuclear policy, signed by Putin, the country would use nuclear weapons in two scenarios: in response to the use of nuclear weapons or other unconventional arms against Moscow or its allies — or in response to “aggression” using conventional arms “when the very existence of the state is put under threat,” per the Bulletin of the Atomic Scientists.

Russian President Vladimir Putin’s chief spokesman has conceded that Russia has yet to achieve any of its military goals in Ukraine and refused to deny that Moscow could resort to the use of nuclear weapons.

In an interview with CNN’s Christiane Amanpour on Tuesday, Dmitry Peskov repeatedly refused to rule out that Russia would consider using nuclear weapons against what Moscow saw as an “existential threat.” When asked under what conditions Putin would use Russia’s nuclear capability, Peskov replied, “if it is an existential threat for our country, then it can be.”

Putin has previously hinted at using nuclear weapons against nations that he saw as a threat to Russia. Back in February, the Russian President said in a televised statement, “No matter who tries to stand in our way or all the more so create threats for our country and our people, they must know that Russia will respond immediately, and the consequences will be such as you have never seen in your entire history.”

He then said in a televised meeting with Russian defense officials that “officials in leading NATO countries have allowed themselves to make aggressive comments about our country, therefore I hereby order the Minister of Defense and the chief of the General Staff to place the Russian Army Deterrence Force on combat alert.”

What does all of this mean?

Unlike the United States, which has a policy of no use of nuclear weapons against non-nuclear states, Russia has no such policy. In fact, Russia has a strategic theory called escalate-to-deescalate.

This does not mean that Russia will use such weapons, and deterrence at the strategic level appears to be robust. At the tactical level, however, the situation is different. The 2018 US Nuclear Posture Review ascribed to Russia the view that “the threat of nuclear escalation or even first use of nuclear weapons would serve to de-escalate a conflict on terms favorable to Russia.” Russian military theorists have certainly discussed this idea of “escalating to de-escalate,” though whether it is a part of Russian doctrine is disputed among students of Russian strategy. “Escalating to de-escalate” in a war with NATO would run the serious risk of escalation rather than de-escalation. In a local war with a non-nuclear adversary, however, the small-scale tactical use of nuclear weapons might be a serious temptation, especially if the war were not going according to plan. In short, the impulse to escalate in a tight corner could be strong.

In other words, if the war in Ukraine goes pear-shaped, and I think it is safe to say we are getting close to that point, it would not be outside Russian strategic thinking to pop a smallish nuke somewhere in Ukraine and say to NATO, “stop supplying Ukraine right now or I’ll do the same to you.”

I think we are in the middle of that strategy right now. Remember Putin’s speech announcing he was invading Ukraine.

For the United States and its allies, it is a policy of containing Russia, with obvious geopolitical dividends. For our country, it is a matter of life and death, a matter of our historical future as a nation. This is not an exaggeration; this is a fact. It is not only a very real threat to our interests but to the very existence of our state and to its sovereignty. It is the red line which we have spoken about on numerous occasions. They have crossed it.

I would now like to say something very important for those who may be tempted to interfere in these developments from the outside. No matter who tries to stand in our way or all the more so create threats for our country and our people, they must know that Russia will respond immediately, and the consequences will be such as you have never seen in your entire history. No matter how the events unfold, we are ready. All the necessary decisions in this regard have been taken. I hope that my words will be heard.

Here he ties NATO membership by countries bordering Russia as a threat to Russia’s aspirations and therefore to Russia’s very existence. Keep in mind that Latvia, Lithuania, Estonia, and Poland are already in that category. He also labels interfering with Russia’s operations in Ukraine as another red line that will cause Russia to “respond immediately, and the consequences will be such as you have never seen in your entire history.”

We also don’t know what is meant by “the very existence of the state is put under threat.” Does this refer to a victory parade through Red Square? Does it refer to Russia being kept from its rightful place in the sun? Or does it refer to the political, and maybe corporal, existence of Vladimir Putin, who strikes me as very much a “lL‘etat, c’est moi” kind of guy?

Russia is a nuclear power. Even though the odds of a nuclear weapon surviving 30 years of Russian-quality maintenance, we have to assume some of them still work. That fact is not going to change. That said, the fact that Russia has nukes and is becoming increasingly casual about threatening to use them is no reason for us to engage in submissive urination when he does. Under no circumstances can we allow ourselves to be intimidated into submission because Putin is making public noises about what he might do. If we go that route, we will find ourselves abandoning all the NATO states bordering Russia and more. Because once he finds he can get his way using this tactic, he will not stop.

What we do know is that there is no reason to believe that any moral or humanitarian case will persuade Putin not to pop a nuke on Kiev or some other Ukrainian city. What we have an obligation to do is spell out very clearly, in private, that if he does use a nuclear weapon, we reserve the right to retaliate with a similar weapon on a similar target inside Russia. And we will hunt to the ends of the earth anyone who had any role in its use, from Putin down to the guy who changed the flat tire on the vehicle used to transport the warhead and kill them.

My personal suspicion is that Putin and his nuclear threats are a lot like Cleavon Little in Blazing Saddles. They only work if we buy into the framework Putin is constructing.