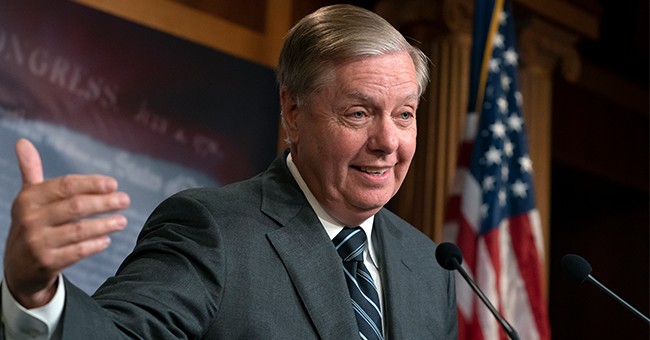 We haven’t heard much from Lindsey Graham 2.0 in a while. After his seeming transformation during the Donald Trump years, highlighted by a rousing defense of Brett Kavanaugh, the South Carolina senator reverted back to praising Joe Biden and rubber stamping Democrat nominees over the last year or so. Graham also got completely duped during last year’s fight over the now-passed infrastructure bill, throwing his support behind the president despite being lied to.

But while Graham’s spine is made of jello on most issues, there’s something about Supreme Court battles that gets his juices flowing. Perhaps it’s the extremely establishment nature of such battles? Whatever it is, we saw him respond forcefully with Kavanaugh, with Amy Coney Barrett, and now with Ketanji Brown Jackson.

Graham’s line of questioning elicited immediate outrage. How dare he ask a Supreme Court nominee about their religious background? That’s unheard of and completely out of line!

Except that’s exactly what Democrats did regarding Amy Coney Barrett, and Graham made it clear that he was basing his questioning on that. Is KBJ’s religion actually relevant? Likely not (well, to me it is, but I mean governmentally), but neither was ACB’s. Yet, Democrats and mainstream media outlets alike trashed her as some kind of religious nutjob for daring to be observant in her faith. What goes around comes around, and to his credit, Graham had the guts to make Democrats reckon with the standard they had previously set.

There was also another interesting aspect of the exchange. KBJ’s answer to the question of what her faith is was “non-denominational Christian.” Personally, I’ve got zero issues with that because I’m a non-denominational Christian, but it is worth noting that such a descriptor typically denotes a historically Pentecostal background. Given that, when are the media going to start running stories proclaiming KBJ a religious extremist? ACB, though from a Catholic background, is part of a subsect that also believes in some Pentecostal elements. She was savaged as a crazy person for it. KBJ should get the same treatment, right?

Of course, she won’t get the same treatment because the “concerns” over any nominee’s religious views come down to one thing: Keeping the killing of babies in the womb legal. KBJ has the “right” (see: far-left) opinion of Roe v. Wade, so nothing about her religion is relevant according to the left. But if a Republican nominee goes to church and thinks it’s wrong to scramble kids pre-birth, suddenly, religious beliefs are ripe for scrutiny. Funny how that works.

Returning to Graham, despite his laudable performance here, he’s still what he’s always been. He’s going to do just enough to not have himself cast into the outer darkness, politically speaking. But when push comes to shove, he’s still the same Democrat-friendly, GOP squish he was during the Bush years. So while it’s nice to see Lindsey Graham 2.0 rise from the ashes, don’t expect it to become a trend. In fact, I’d guess he ends up voting to confirm KBJ. We’ll see, I guess.