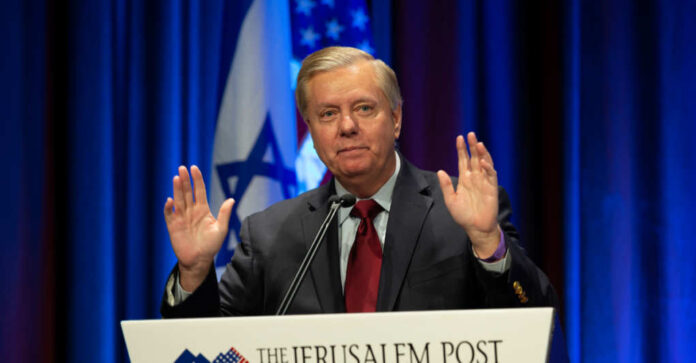 Say what you will about Sen. Lindsey Graham (R-SC), but the man has spunk and is not afraid to tell you where he stands on the issues. At a press conference on the 16th, he opened up to the press about a variety of issues. It was however the points about the Russian invasion of Ukraine, and Vladimir Putin that made the most waves with people on both sides of the aisle.

“I hope he’ll be taken out, one way or the other. I don’t care how they take him out. I don’t care if we send him to The Hague and try him. I just want him to go. Yes, I am on record.” This idea of taking Putin out by any means necessary is something that people have a hard time wrapping their minds around. A large reason for that is the proliferation of more tightly controlled politically correct speech.

Sen. Graham wants no part of that. He wants a part of a free America and an America where people can feel completely free to express their ideas and their viewpoints without someone treating them like trash over it. He believes that the truth might be harsh, but it needs to be said. In this case, right here, he is hitting the nail squarely on the head. The way he is tackling the issue is something America needs more of.

That’s a point former Sen. John McCain (R-AZ) could empathize with. He knew that a few harsh words being used to deliver the truth just helped them stick better. He knew how difficult it could become when people refuse to pay attention or help. He always wanted to see the best out of America. After spending years as a POW it’s no wonder why. So when Sen. Graham goes off on a rant about Putin he is channeling the support and endorsement of his long-lost friend and fellow Senator.

Options for how to get something done are a beautiful thing. By outlining good ways for Putin to leave office, Sen. Graham is doing something every employer loves. He is finding a problem and creatively brainstorming solutions. He is openly stating what he is not asking for as well, so his solutions are well established and clear. This is what we need more of in politicians. The leftist ideal of mumbling short answers that provide no direction needs to go away.

The idea of telling someone that they need to go away by any means possible is one that most adults can fantasize about. From co-workers to customers, to in-laws, to the newly relocated Californian who won’t quit talking about being vegan or changing your state’s laws, we all have that one person who really needs to be taken out for the good of humanity. In Sen. Graham’s eyes, that’s Putin.

That’s not to say there are not others, Putin just happens to have made himself the flavor of the week with his horrific decision-making. His aggression into Ukraine has cost his country dearly and on many fronts. They have lost thousands of their service members, devalued their currency to historic lows, divided their countrymen, and made chunks of the world hate their nation. All under false pretenses that Putin cannot and will not prove are true. Sen. Graham is in response proposing the best thing for everyone. Especially as Putin looks to want WWIII to start as a result of his actions.