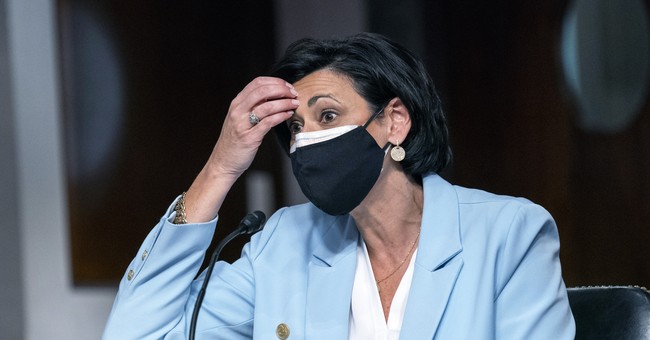 Trying to decide which governmental institution has suffered the greatest loss of credibility over the COVID-19 pandemic is a bit like trying to decide whether it’s better to take a left or right jab to the head. There’s really no wrong answer, and it’s all going to hurt.

Yet, when looking at the CDC, they sit somewhere near the top — given just how apolitical the organization seemed to be prior to the coronavirus. Sure, nothing in Washington, D.C., is ever actually apolitical, but at least it was such a small part of our lives that you never really thought about it.

Over the last two years, though, the CDC has been interjected into American policy-making in unprecedented ways, and that’s led to some terrible results via unsupported mask hysteria, lockdowns, and other mandates. And while you’d expect an organization founded on “science” to never do things with a political bent, it’s clear CDC Dir. Rochelle Walensky has been getting her orders directly from the Biden administration.

Now, another example has emerged. The CDC has “revised” pediatric deaths from COVID-19 down 24 percent, after a “mistake” was discovered. This per The Daily Caller.

The Centers for Disease Control and Prevention (CDC) revised its data this week to reduce pediatric deaths from COVID-19 by nearly 24%.

On Tuesday, the agency was reporting on its COVID Data Tracker that 1,755 Americans under age 18 had died from the virus since the pandemic began in spring 2020. Now, it is reporting 1,341 deaths in that category.

The CDC said the number was revised March 15 due to a “coding logic error,” according to a footnote on the agency’s COVID Data Tracker. Pediatric death counts were not the only ones to be lowered — total deaths were reduced by roughly 70,000.

The debate over COVID-19’s risk to children has raged since the first infections were made known. It has been clear since at least April of 2020, though, that kids are simply not at any significant risk, certainly not to the point of justifying shooting them up with vaccines and forcing them to wear masks (that some states still require such is insane).

Yet, the White House has steadfastly been pushing for child vaccination from COVID-19. The CDC’s higher pediatric death numbers just so happened to play into that narrative. I’ll let you decide whether it was truly a “mistake” or not, but color me suspicious. How does a screw-up like that happen at a multi-billion-dollar funded, government entity? And it only gets “corrected” after the FDA rejects vaccination for small children? It’s just all a bit too convenient.

At this point, the CDC has made enough “mistakes,” including falsely framing numerous studies on child masking, that they don’t deserve the benefit of the doubt. How does Walensky still have a job? The answer is likely because she’s a good soldier for the administration, and because of that, even with this latest error “corrected,” don’t expect the CDC to revise its overall messaging.

Again, there is no reason for children to be isolated, jabbed, and masked in regards to COVID-19. The risks are just not there. A child is more likely to die from the flu than the coronavirus. But there’s a lot of money to be made from pushing vaccines on kids, and the Biden administration seems completely invested in that endeavor.