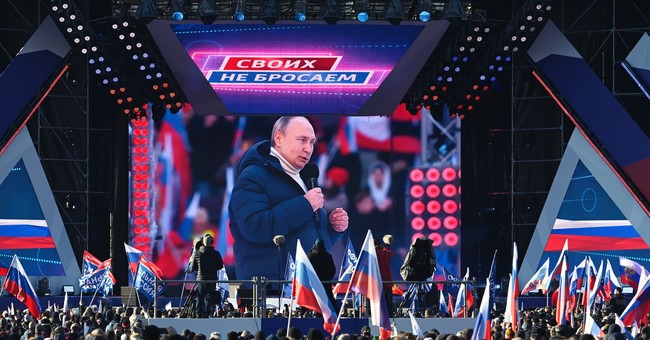 Vladimir Putin is doing all he can to project an air of success with his disastrous decision to attack Ukraine.

But it hasn’t gone well with all kinds of issues — from thousands of their troops killed and some very high-placed officers being taken out by the resistance to getting bogged down and not being able to take Kyiv yet. As I noted earlier, if the Defense Ministry has to make up a lie in order to post a propaganda “win,” you know it’s not going well.

Indeed, on Saturday, it was announced that yet another Russian general had been killed in the fighting, according to the Ukrainians, Lieutenant-General Andrey Mordvichev, commander of the 8th army of the southern military district, was killed when they took out a Russian command post at an airfield in Kherson. But, the Russians are trying to bomb and blockade some cities into submission.

At this point, Putin was desperate for a big photo-op, and he threw one on Friday, packing Moscow’s Luzhniki Stadium with thousands of people seemingly cheering for the war and wearing “Z” — a symbol of the war effort.

Not only did Putin want to project that people were supporting him, but he also wanted to commemorate the eighth anniversary of the annexation of Crimea. But there were a few problems with this scenario which threw off all kinds of Nuremberg vibes.

First, quoting the Bible while attacking and killing civilians shows a lot of cognitive dissonance.

But beyond that, there was a problem during the speech that had people wondering what was going on. Right in the middle of Putin speaking, the video suddenly cut away to a band playing for a few seconds, and then it cut back to Putin.

It isn’t clear why, and it sparked conspiracy theories that either he wasn’t there and it was pre-recorded, or that resistance did it. The Kremlin claimed there was a “glitch.” Well, that’s one way of putting it.

But beyond the glitch, there was a bigger problem with the picture. The BBC spoke with some of the people who attended. Many were public sector employees who said they’d been pressured to attend by their employers. Some said they had been forced to attend. Others were students who were told that they would get the day off if they attended a ‘concert,’ and didn’t know what the event was about.

Many of them didn’t even stay, booking it out of there about half an hour into the event.

So, while there were doubtless some real supporters there, once again, it wasn’t quite the picture that Putin would like to present to the world.