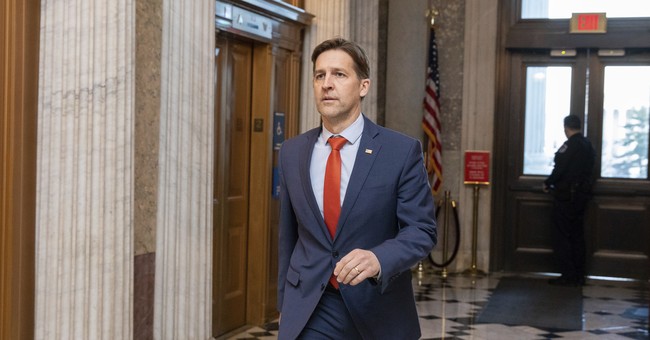 There’s perhaps no grosser process in the United States Congress than the appropriations process for spending taxpayer dollars. That was on display again in early to mid-March, as another $1.5 trillion spending bill made its way through the two chambers, eventually passing in the middle of the night as has become standard procedure.

No one who voted on it read all of it, and as expected, it was full of ridiculous pork, from funding for the Kennedy Center (which gets a massive payoff seemingly every year) to half a billion dollars for PBS. The bill also included money for Ukrainian aid, which totaled less than one percent of the spending. Because of that, some Republicans voted against it, not because they are pro-Putin, but because they disapproved of the vast majority of the bill.

As RedState reported, that then led Chris Murphy to lash out on Twitter, asserting that members like Ben Sasse were hypocrites because they were criticizing Joe Biden’s response to the Russian invasion while voting against a bill that contained aid for Ukraine. Sasse responded with one of the best Senate floor takedowns I’ve ever seen.

Really, it was that good. If you didn’t catch the video of him demolishing Murphy’s “self-pleasuring” the first time around, here’s what that looked like.

I know Sasse isn’t exactly well-liked among parts of the Republican base because of some things he said during the Trump years. In this case, I don’t care, though. I’ve been waiting for a Republican to stand up on the Senate floor and say this for years.

Think about how common sense Sasse’s argument is. Murphy claims that in order to pass legislation, you must compromise on bits and pieces of it. But, how is a $1.5 trillion spending bill a “bit” or a “piece.” Instead, it’s a massive boondoggle of thousands of different appropriations, many of which are completely unnecessary and not in the purview of the federal government, all crammed into a single piece of legislation.

Sasse responds by noting just how insane that is and that most Americans almost certainly disapprove of how their money is spent (congressional approval ratings agree). And to be sure, it’s not just Murphy and his party who are to blame. Mitch McConnell, the GOP Senate Minority Leader, is also a big fan of the omnibus process, doing nothing to push back on it over the years, and most Republican senators voted for this latest example.

How hard would it be to make a single bill that says “Aid for Ukraine,” and only includes…aid for Ukraine? On such a bipartisan issue, why even attempt to stick that in a huge, controversial spending package? The answer is that Murphy and his ilk wanted the wedge point.

Republicans have an opportunity here if they retake the Senate in 2022 (and they will certainly make big gains there in 2024 because of how the map lays out). They can keep this irresponsible omnibus process in place or they can return some sanity to the institution by passing bills that are more narrowly focused. It’s one thing to have a “transportation bill” that includes lots of different appropriations. Obviously, some condensing along specific areas is going to happen. But you can tailor legislation so that what’s included is at least related. Ukrainian aid has jack to do with the Kennedy Center. Those things should not be in the same bill.

Further, doing that would put pressure on Joe Biden, forcing him to veto clearly defined bills with things that are broadly supported while demanding massive, nebulous spending packages. I’m going to guess that most Americans wouldn’t side with the president on that. In other words, what Sasse is saying is not only responsible, but it’s smart politically.

Unfortunately, I have little faith Republican leadership will make those changes to the appropriations process. Instead, look for more omnibus bills under the guise of “keeping the government open.”