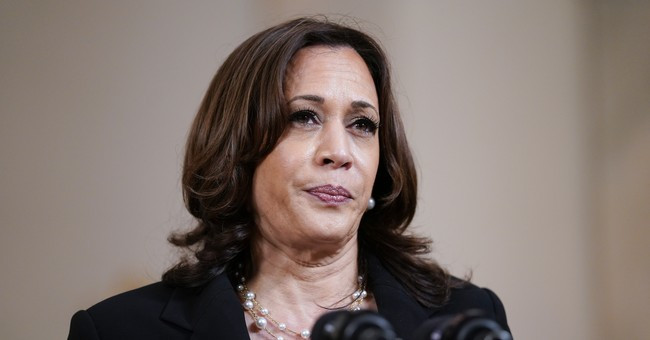 Vice President Kamala Harris is the one person in Washington who does not know what she is to be doing in her positions of authority. Joe Biden is content to provide her with new titles that she can add to her liberal resume. As she tries to make sense of a new world that she is highly unqualified to work in, she is finding that there are people who will keep her honest and hold her feet to the fire of accountability.

In a speech that she tried to give to people who really do not care what she has to say, Harris tried to pinpoint and explain what she sees as the leading cause of why so many people are moving north. She cannot bring herself to admit that it is because Joe Biden invited them to come and overrun the country.

Harris claims that the reason for the caravans of people invading the country is because of the climate. Somewhere in her twisted mind, she believes that climate change is the reason why so many people are leaving their busted-up socialist ruined countries and are moving north.

She cannot see that the real reason is because of the high prices and dictatorship rule that has ruined their lives. She cannot admit that the people coming north or sexual predators and human smugglers are trying to deliver their kidnapped cargo over the border so they can get paid. She has no clue what she needs to be doing to stop these people from violating American laws and threatening the livelihood of American citizens.

VP Harris claims “the lack of climate adaptation and climate resilience” are “root causes” driving the surge at the southern border pic.twitter.com/7hYYRsnI3t

Harris is content to try and overthink the issue. All she has to do is take a look at how Donald Trump handled the issue to see what it took to make the border secure for all people. But her pride is keeping her from admitting that a Republican president had it right from the start.

In her speech, Harris noted that “I’m thinking of corruption, violence and poverty, the lack of economic opportunity, the lack of climate adaptation and climate resilience, the lack of good governance.”

Every one of the reasons she listed minus climate change is a direct cause of socialism and failed leadership. The very policies that she stands for are the reasons why so many people are looking to move northward. They want to escape the terror of socialism and communism that is setting in for Central American countries.

One report noted that “While she didn’t immediately go into details, she later spoke of delivering food, shelter and water to the people of Honduras, and, in Guatemala, working with farmers to plant drought-resistant crops and help women farmers increase their crops. Harris has cited weather and climate issues before when talking of ‘root causes.’ Recently, in a Northern Triangle roundtable in April, she spoke extensively of the list of issues she believes are root causes. […]”

The root cause of the crisis is your open border policy, @kamalaharris.https://t.co/p3pKPNAp4Y

Kamala Harris has no clue as to what is causing so many people to flock to the north. She is blind to the fact that her beliefs are the root cause. It will take divine intervention to help her see the reason why people are trying to gain illegal access to America.

Donald Trump was the one that had the right approach to controlling illegal immigration. He did not have to invent ignorant reasons and explanations to try and drag the matter out. He told the truth and dealt with the root causes of the problem to the point that he got the flow of people to stop. And for a brief time, the border agents were able to take some time and regroup before Biden took over in the White House.