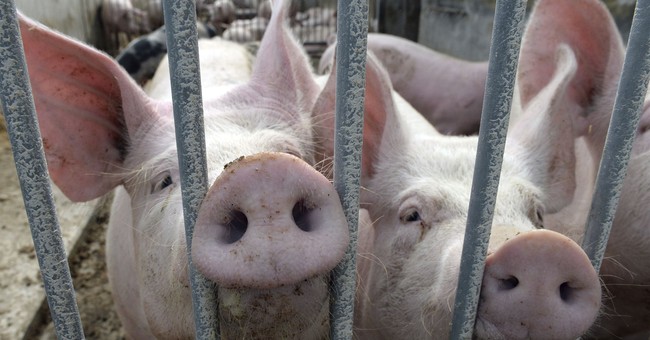 The pigs are back.

After an 11-year hiatus, earmarking has returned to the federal budget. The 1.5 trillion dollar budget includes earmarks. The pork is, for the most part, blue. The majority of Republicans didn’t pork the budget deficit for cronies and donors, and to buy votes, but some Rs bellied up to the feed-trough. In total, there are around $9.7 billion in earmarks.

Earmarks were removed 11 years ago when the Republicans retook Congress, but like a relapsed alcoholic, Congress is again binging-spending money we don’t have.

Maybe we shouldn’t complain – it’s part of the fight to “make things right,”- right? The budget consists of 2,741 pages, with a measly 4,000 earmarks for people, and shellfish.

Sheldon Whitehouse got $1.6 million earmarked for “development of equitable growth of shellfish aquaculture in Rhode Island.” Maybe Senator Whitehouse is feeling guilty about his membership in an all-white beach club, but why push equity for shellfish? Are shellfish a voting block in Rhode Island? Do the Rhode Island shellfish identify as crustaceans of color? Is there an affirmative action plan to see that all shellfish are eaten equitably? Who knows, but there goes $1.6 million.

Liz Warren got $500,000 for Worcester State University for diversity and inclusion for STEM students to study climate change. That grant checks two boxes on the woke list. No word if there is any carve-out specifically for Warren’s tribe.

Jamaal Bowman of New York’s 16th district requested a lot of earmarks, including $496,000 for ‘capital improvements” to a YMCA pool. I have no idea what patching up a pool in the Bronx has to do with the federal government, but Bowman said it was for capital improvements. Yet the earmark text talks about the fact that 64 percent of black kids can’t swim. I don’t think that teaching kids to swim is a “capital improvement” to a pool. And if it’s to keep kids from drowning, that seems like a whole lot of money for floaties.

Chuck Schumer gets the grifter gold medal this year. In 140 earmarks, there’s a total of $258,000 million for the good folks of New York. It’s a coincidence that it’s an election year.

Houston is blue city in a red state. It’s getting a museum dedicate to the life and memory of Mahatma Gandhi. I don’t know what connection he has with Houston or Texas, but three million U.S. dollars are going to be used to build a memorial to Gandhi. I’m guessing but I don’t think that Gandhi’s well-documented racists beliefs-that blacks were inferior to Europeans and Indians-won’t be placed on center stage. The left likes to forget that part of his legacy.

Senator Patrick Leahy, along with Sen. Richard Shelby of Alabama, combined to get $800 million for their states.

And Alaska doesn’t get a bridge to nowhere this year, but it gets millions in pork, with $10 million to tear down a hotel in the city of Fairbanks. You might be asking – what does a hotel in Fairbanks have to do with the federal government? Nothing. Next question.

Sure, there’s several billion of US dollars going to Ukraine to effectively close its border from Putin’s invaders, but Trump spent years fighting Pelosi to get under $4 billion for a wall at our southern border. Priorities.

The deficit is $30 trillion. According to Biden, the federal government spending more actually reduces the budgets. So next year, maybe that budget should be $30 trillion, and we’ll magically be out of debt. That’s how it works, right?

Want more to depress you? Check out more of the items, here and here.