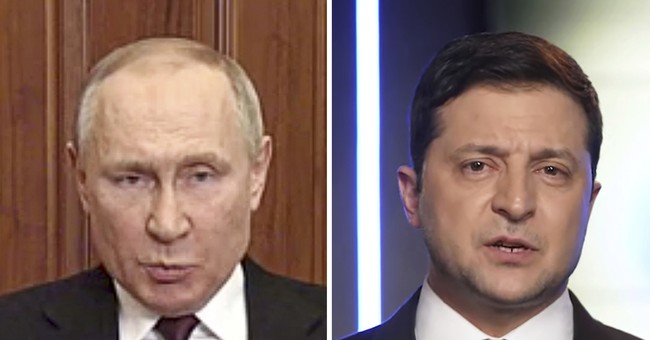 There is already far too much stupidity over the Ukraine/Russia conflict making its way through the interwebs and airwaves – there is no need to add more. Much of it has to do with the leaders of both countries and who, if anyone, Americans should be supporting.

But one of the latest dustups involved conservative commentator Matt Walsh, who became upset when RedState’s Jerry Wilson wrote a piece featuring a song praising Ukrainian President Volodymyr Zelensky. The song, which was written by Five For Fighting – AKA John Ondrasik – was a tribute to the Ukrainian leader in his struggle to stand against Russia’s aggression.

In response to the piece, Walsh tweeted:

Of course, the song does not paint Zelensky as a representation of Christ, as Wilson noted in his reply to Walsh’s tweet. When one listens to the song, it is easy to see the “Daily Wire” podcast host is overreacting.

He’s not the only one. His colleague Candace Owens also has it in for Zelensky. She recently tweeted:

President Zelensky is a very bad character who is working with globalists against the interests of his own people. I will not move one inch away from that assessment–ever–no matter how flowery the media depictions of him are.

Footage has been circulating on social media showing Rep. Madison Cawthorn (R-NC) referring to Zelensky as a “thug.”

So, what do these three individuals have in common? They have little to no criticism of Russian President Vladimir Putin, who is objectively far more nefarious than Zelensky. Putin has imprisoned, and even killed, journalists and dissidents who were critical of his regime. He cracks down on speech on a routine basis. He invaded Ukraine, and is responsible for thousands of Russian and Ukrainian deaths. He is the very antithesis of everything America stands for.

This isn’t to say the Ukrainian leader is as pure as the driven snow. It is a commonly-known fact that the country’s government has a huge corruption problem. The man isn’t perfect, as RedState’s Bonchie pointed out. But a brutal dictator he is not. Putin’s evil can be seen in the many news reports showing what his military is doing to Ukraine. But folks like Walsh and company might respond to this by joining others claiming any negative reporting on Russia is an attempt to get the U.S. to send troops to the region.

So, why is Zelensky so deserving of criticism and not Putin? It doesn’t seem rational, given the two men’s histories. It’s like being more upset at South Korea’s flawed leadership, while ignoring the vicious rule of North Korean leader Kim Jong Un. It makes absolutely no sense.

It’s difficult to tell whether this is just a need to be contrarian for clicks or a deeply-held belief that Zelensky is more worthy of criticism. Perhaps it is a knee-jerk, reactionary impulse to say the opposite of whatever the activist media is saying. The press has clearly taken the position that Putin is the bad guy and has cast Zelensky in a positive light, so maybe some on the right are just reacting instead of taking the time to look into the matter and form their own opinions.

Of course, I am not arguing that Walsh, Owens, and Cawthorn like Putin. But given the commentary coming from these and some others on the right, one has to wonder where they truly stand on the two leaders.

Either way, focusing our ire on Zelensky more than Putin is foolish. One can point out negative aspects of Zelensky’s leadership without ignoring the malevolence in Putin’s actions. The question is: Why is this so hard for some to grasp?