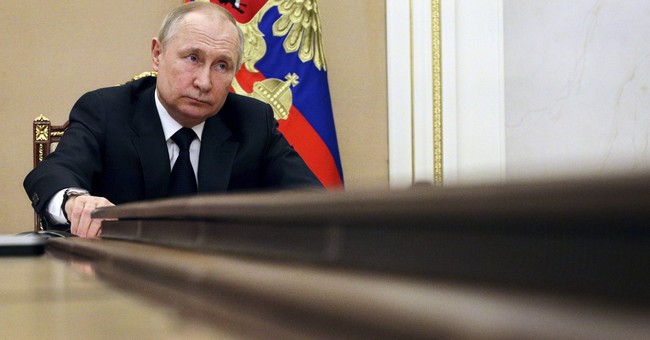 Multiple sources report that Vladimir Putin has ordered the arrest and detention of General Roman Gavrilov, the deputy director of Rosgvardiya, or the National Guard of Russia. This National Guard is not to be confused with anything like our National Guard. The Rosgvardia is composed of internal security troops, from police to paratroops and special forces, that report directly to Vladimir Putin and whose responsibility is the stability of the state.

In 2016, President Putin signed a decree that created the National Guard, known in common parlance by its Russian name Rosgvardiya. This did not entail whole new organizations or the recruitment of new troops, but rather a reorganization of existing internal security forces into a separate agency reporting directly to Putin. The most significant change was the transfer of 140,000 Internal Troops from the Ministry of Internal Affairs (Ministerstvo Vnutrennikh Del: MVD), which formed the base of the new organization. The Ministry of Internal Affairs lost another 40,000 troops in the OMON Special Purpose Mobile detachments (otryad mobilnyi osobennogo naznacheniya: OMON), as well as 12,000 in the Specialized Quick Reaction Forces (spetsialnyi otryad bystrogo reagirovaniya: SOBR). MVD’s moneymaking arm of the Okhrana, which provides government security guards for a fee, was also transferred to the new National Guard.

The Internal Troops, divided into operational brigades, divisions, and special forces detachments, form the bulk of what could be considered a counter-insurgency army. Other forces form motorized units to support the OMON or SOBR, while conscripts fill the bulk of other independent battalions or regiments, largely providing static fixed site security. These forces are distributed among seven regional commands that differ in capability and size. Some reports put the total personnel strength of the Rosgvardiya at approximately 400,000 although exact numbers are unknown.

There were the usual denials, but, for once, they were quickly debunked by Russian media.

As a bonus, Gavrilov was previously in Putin’s personal security service.

What led to this downfall? Probably none of the quasi-official reasons.

One source said he was fired over alleged leaks of military intel which ‘led to loss of life’, while two others said he was cuffed for ‘wasteful squandering of fuel.’

Under Russian doctrine, the Rosgvardiya follows behind the frontline troop to cow civilian populations into submission and suppress any hint of resistance. According to various reports, Rosgvardiya were among the leading elements of the invasion forces, probably due to the Russian intelligence assessment predicting the Ukrainian armed forces would melt away and the people would welcome them. There is good reason this terribly flawed assessment led to the arrest of senior FSB officers earlier this week, see Trouble in Paradise: Putin Arrests Senior FSB Officers Over Ukraine Fiasco. As a result, Putin’s private army suffered heavy losses when facing armed opposition rather than protesting grandmothers. Some theorize that Gavrilov was arrested for mismanaging Rosgvardiya operations and causing unnecessary losses.

Regardless of the reason, a favorite of one of Putin’s inner circle has been arrested. That, alone, is a sign of turmoil within the Kremlin.