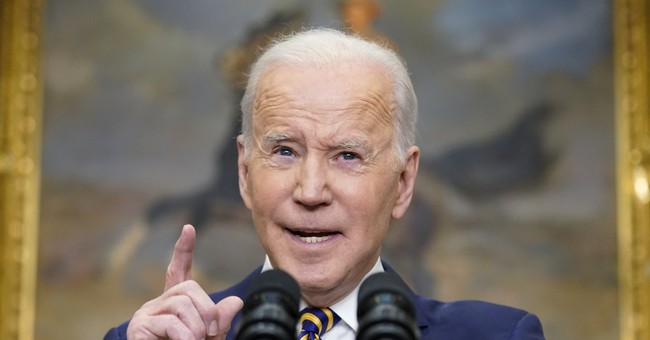 Right now, Democrats are absolutely reeking of desperation and the smell only gets more pungent as we get closer to midterms. One of the things they’re sweating the most is the energy crisis, a situation that went from bad to worse thanks to bad or worse decision-making on behalf of the Biden administration. Decisions he’s been making since day one.

Democrats are doing their absolute best to spin the crisis to be the fault of anyone or anything but themselves. From Jen Psaki on down, Democrats want you fixed on Russian President Vladimir Putin as the cause of all of your troubles. Case in point, Fox News reported on Tuesday that Washington Democrat Rep. Kim Schrier is pointing at Putin for the energy crisis:

“What do you believe?” Kruse asked the Democrat, after noting that political pundits across the country differed on who to blame for Americans having to pay $4, $5, or even $6 for a gallon of gas.

“I believe a couple of things,” answered Schrier. “Right now, in the last two weeks, this is Putin. You should be blaming Putin, if anyone for this.”

Of course, as any die-hard Democrat politician is wont to do, Schrier injected a little bit of guilt for anyone who dares disagree with her.

“To not blame Putin, first of all, is denying reality, and second, frankly, I think is un-American,” said Schrier. “So this is Putin’s fault.”

To be sure, the price of gas began going up before Putin began his war on Ukraine, but undeterred, Schrier had an excuse for that too.

“People were already suffering at the gas pump before this,” Schrier said. “We saw an increase of over a dollar per gallon over the last year and a half or so. That can be blamed realistically on the pandemic.”

“When people were not going to work and driving was down, gas prices were down,” she added. “As demand increased and rigs had not yet been turned on, there was a supply-demand issue like with everything else in this country and that [the pandemic] was to blame.”

As RedState covered earlier, this attempt at rewriting history has extended to using TikTok influencers to fool people into believing this very narrative. It’s apparently not going well.

It’s hard to convince Americans of a lie when they saw the truth right before their eyes. Biden declared war on domestic oil drilling before he was elected, and on day one signed an order that stopped the construction of the Keystone XL pipeline. As data shows, Biden’s actions caused gas prices to begin rising the moment he stepped into power. His entire idea was to bring in an age of green energy, an age we’re not situated for.

Like Marie Antoinette, Biden and the Democrats believe that if the rising price of gas is too much then we all should just rid ourselves of our fuel-guzzling vehicles and embrace the far more expensive electric vehicles.

As far as Biden is concerned, however, loosening environment regulations is off the table.

Bottom line: We’re currently living in the midst of a massive Democrat virtue signal about the environment, and it’s not only incredibly expensive for us citizens, but it’s also destabilizing global security. Domestic energy and national/international security go hand in hand, and the White House needs to be stripped of the ability to just swipe a pen and stop it all.