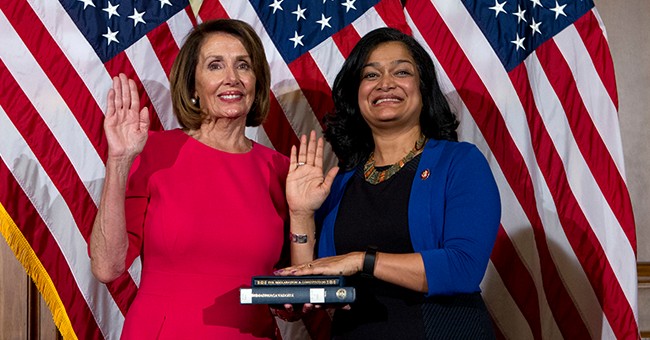 Prices at the pump are crushing American budgets with no end in sight, with gas averaging over $4.00 a gallon across the nation, and far higher in certain localities. In the midst of that, the Biden administration has steadfastly refused to lift a finger to help, instead choosing to snark at oil companies that Democrats have spent years trying to diminish. That left the White House crawling to Venezuela to beg for more oil. The response was essentially: “take a hike.”

But no worries, House Democrats have another brilliant plan which is sure to make things astronomically worse: Declaring a “climate emergency” and immediately stopping all oil and gas drilling on public lands.

House progressives are planning to call onPresident Joe Biden this week to use his executive powerto declareclimate change a national emergency and to ban fossil fuel drilling on public lands.

The request from the Congressional Progressive Caucus comes as many Democratic clean energy priorities have stalled in Congress. The push for the sweeping use of the executive powers expected from the group of nearly 100 lawmakers on Thursday will also touch issues such as studentloan debt, voting rights and immigration.

You almost have to respect the sheer amount of gumption it takes to propose this as gas prices continue to explode, partly due to how cost and time prohibitive it is to currently drill on public lands. Clearly, Democrats do not care about the poor and working-class at all, to the point where they’d impoverish millions of them (and probably kill some as well, given how dangerous a lack of affordable energy can be).

These people absolutely hate you and want to see you suffer. I’m not sure how much clearer they can make it. And for what? To make a delusional Swedish teenager happy?

To ban all oil drilling on public lands would not only dramatically raise the cost of attainable energy, but it would also lead to dirtier drilling in other parts of the world, controlled by tyrants like Vladimir Putin and the Iranian Mullahs. What exactly would that do for the “climate”? Is the argument that drilling in the United States is somehow worse than in Saudi Arabia?

What we are seeing here is abject lunacy on a scale seldom seen at the federal level, and that’s truly saying something, given how horrific some past decisions have been. The Democrat Party and its radical, economy-crushing policies must be rejected at the ballot box. If they aren’t, the consequences will be dire.

Luckily, I’m not sure Joe Biden is dumb enough to go along with this. Don’t get me wrong, the guy wouldn’t know a good decision if it slapped him in the face, but banning all oil drilling on public lands? Nah, not even the president is that nuts, or at least I hope he’s not that nuts.

Something has to give here. Americans cannot keep suffering under the current energy crisis. Yet, instead of proposing solutions, Democrats are busy trying to make the situation far worse. Vote accordingly.