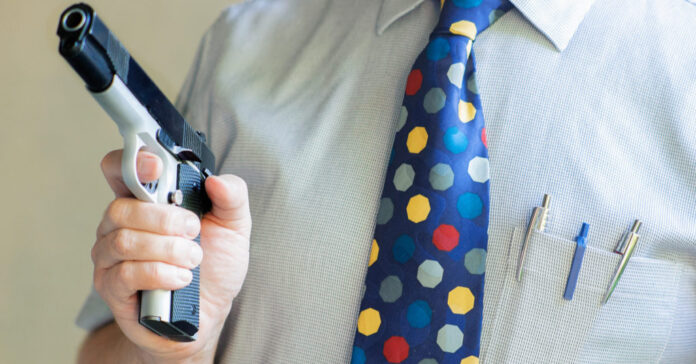 The Democrats are running scared now that a school district in Texas allows teachers to bring guns to the classrooms. The reasoning behind the allowance is to provide a deterrent to anyone who would try to harm the 1,200 students who attend the various schools in the Grand Saline Independent School District. Parents and administrators are sick and tired of feeling unsafe every time they go to work or drop their kids off at school.

Democrats claim that guns are the problem behind the shootings around the country. They claim that gun control is the answer to putting an end to school shootings and people being shot in a fight or out on the street. But the cruel truth is that these crimes occur because peaceful people do not have the means to defend themselves when evil shows up.

But now, this small school district in the Dallas area has armed the teachers so they can defend the youth that attends the schools. Micah Lewis is the district’s superintendent and stated, “Every time there was a school shooting, the board and I talked about it again. If some crazy came in here, could we minimize the damage by being armed?” The Daily Wire also noted that Lewis told the New York Post that “We’re educators. I hate that we have to do that, but again, you weigh it out. Do you take this student down if he’s mowing people down? It’s an easy answer. You take one to save many.”

Gun control has yet to produce any results that prove it is the answer. The truth is that criminals will find a gun anytime they are committed to shooting people. They can get the gun off the street or from sources found in shadows. Either way, taking away guns from responsible citizens is not the solution. It is simply a way to give the criminal an easy target.

The school leaders will not disclose how many teachers are armed with weapons. They will not even tell what kind of guns are being carried. All people need to know is that they are in place and will be used if a shooter decides to show up and start killing people.

Parents want their kids to learn in a safe place. They do not want their kids to be in a position where a shooter could show up and start killing people without fear. The guns being carried are enough to put the fear of death in any person. And most criminals want their violent actions to succeed, so they will want to choose a target with zero resistance.

The new rule does not allow for the reckless carrying of guns. Each person who chooses to carry a gun must have the correct license. They must also apply to and be approved to the program before being allowed to carry a gun on school grounds. Each gun carrier must go through 40 hours of training, be subject to background checks and screenings, and be willing to take further gun training when the time comes.

The Texas Department of Public Safety is the organization that does the training. The school controls the program, but it has the full support of local law agencies.

The school leaders have also stated that gun owners keep their weapons with them, and the guns cannot be stored on school grounds. The scary part is the school system has gotten to the point where guns are needed to keep control. The Democratic brainwashing effect has told students that they do not need to obey authorities and that they can act however they want towards other students.

The move from peaceful classrooms to facilities with metal detectors and armed guards has been gradual. But the shift has made it necessary for people such as Governor Greg Abbott to sign a law that removes the cap for the number of armed people present on school grounds. He knew that times were different and that teachers would have to take up the role of protecting their students from murderers that would seek to cause them harm.