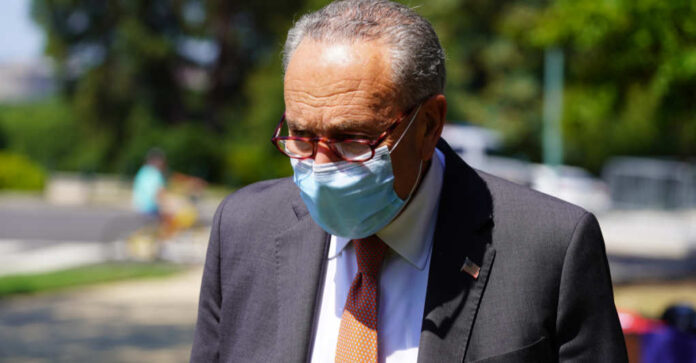 The urgency of the COVID pandemic is over. Mask mandates are being lifted. People are able to go into crowded places while breathing fresh air simultaneously. We’re finally getting back to “normal.”

Chuck Schumer, however, seems to be lost somewhere in 2020 where everyone is still struggling. The old Democrat is clearly in need of retirement, but he won’t give in.

The liberal man thinks that now is a good time to roll out a new spending bill that includes $22 billion for COVID-19 relief.

Is he insane? How does he think that this is a good idea? Inflation is at an all-time high in the country. People are spending hundreds of dollars extra every month to buy groceries. And don’t even get us started about what the cost of gas is up to…

Spending over $20 billion isn’t going to solve anything. And Republicans want accountability to show how all of the previous COVID money was spent. After all, states were given billions – and what did they do with it all?

Schumer explains that the omnibus package will provide funds to the people and government of Ukraine and “additional funds to ensure our country is prepared if and when the next COVID variant strikes.”

Ugh, come on already. Stop with the fear-mongering – even Dr. Fauci knows that COVID is well and over, which is why he hasn’t bothered to try to step into the spotlight anymore.

The OMICRON variant was the weakest of the COVID variants that we’ve seen. While it was one of the most contagious, most people experienced no more than basic flu-like symptoms – and that’s if they even realized that they were sick with the coronavirus.

There hasn’t been another variant on its tail. It’s why the COVID numbers are dropping, even in the largest cities like New York and Los Angeles. It’s also why liberal leaders are feeling confident enough to lift the mask mandates.

The last thing we need is to spend $20 billion to address a problem that is no longer a problem. We expect the Senate Majority Leader to understand this – and yet, here we are.

We keep hearing about various industries that want more money to “recover” from the pandemic. However, with more cities opening up and lifting the mandates, there’s no reason why an industry isn’t capable of recovering naturally. People need to get back to work. And as they get back to work, they can have the available income to go spend money in restaurants, clubs, and stores.

The economy will recover on its own if the government stays out of it with their “packages.”

NIVA, a group of “independent” music venues are asking for more money, though. They don’t care if it will have a negative impact on the economy or not – their hands are outreached for whatever Schumer wants to give them. They already received a federal bailout, but they are supposedly “lobbying for additional funds to deal with ‘inflation and worker shortages compounded by the fact that COVID is still ongoing.’”

It’s time that the Democrats are going to have to say “no” to their own people. Sorry, there’s no more money to give. They have no problem saying “no” to conservative groups.

Get back to work. Deal with inflation like everyone else.

If Schumer really wants to pretend as though COVID is still a real threat, he’s going to need Republicans to get on board with this massive spending bill. The reality is, he may actually have to convince Democrats to approve it, too. Everyone is ready to move forward – and only Schumer still believes that COVID is enough of a threat to spend $20 billion on it.