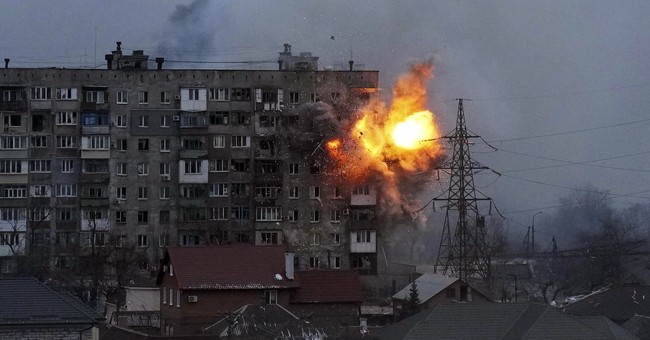 It looks to be an ominous week for Ukrainians as Vladimir Putin cleans house and prepares his next phase of plans for the conquest of Ukraine. In the meantime, the United States and NATO struggle with getting Volodymyr Zelenskyy the help he needs.

Kremlin watchers are undoubtedly fascinated by the intrigue of British press reports of the supposed house arrest of FSB foreign intelligence figures Sergey Beseda and his deputy Anatoly Bolyukh. Vladimir Putin is reportedly very unhappy about the FSB underestimating the capability and tenacity of Ukrainian resistance as well as forecasting that Ukrainians would welcome the Russian military with open arms. Other reports from the Times of Israel and the India Times carry reports that Ukrainian Secretary of the National Security and Defense Council Oleksiy Danilov is saying Putin has fired eight generals for failing to achieve their “special military operation” objectives, the Russian euphemism for its invasion of Ukraine.

Readers should beware, though, as things are never as they seem on the surface when observing the goings-on in Russia. Intrigue that happens inside the Kremlin tends to stay inside the Kremlin. Reading the tea leaves of rumors employs entire wings of buildings at Western intelligence services. The foreboding consequence effects are disturbingly clearer. Moscow is signaling that it (a) considers the Ukrainian government and military a problem that needs to be destroyed, (b) no longer considers the Ukrainian people as friendly, and (c) is determined to change the military tactics needed to complete the conquest of Ukraine. And Mr. Putin wants it done – or else.

The next crop of Russian generals have begun to work on bringing down the Zelenskyy machine’s ability to continue to resist. It started with declaring the pipeline of military support streaming into Ukraine as legitimate military targets. In my previous analysis installment, I wondered just how far back the supply chain this legitimacy would extend. That question got answered overnight when Russia attacked the International Center for Peacekeeping and Security (ICPS) in the western city of Lviv, Ukraine near the Polish border. The message to the West is clear: The supply lines to aid Zelenskyy, including those that might be manned by NATO members, are now on the target list.

Pentagon press spokesman John Kirby made a special effort to point out that the US was not present at the international base at the time of the attack in his Sunday appearance on ABC’s This Week with George Stephanopoulos,

“KIRBY: There were no American service members, no Americans at all working at that training facility. We had left as you know several weeks ago.

ABC: And what can you tell us about the strike? You heard the deputy mayor there. Can you add anything to that?

KIRBY: Actually, I think he has a lot more context than we do right now. We certainly noticed that these strikes were conducted overnight early morning hours there, overnight here. We do know that there was some damage to the training facility and we’re still assessing and talking to Ukrainians about what else they’ve seen here. Look, this is the third now military facility or airfield that the Russians have struck in Western Ukraine in just the last couple of days. So, clearly, at least from an air strike perspective, they’re broadening their target sets.”

Despite this threat, National Security Adviser Jake Sullivan stated that the US will continue to supply Ukraine with weapons on his appearance on CBS’ Face the Nation,

“We believe in our capacity to continue to flow substantial amounts of military assistance, weapons, and supplies to the front in Ukraine. We have been successful in doing so thus far and we believe that we have a system in place that will allow us to continue to do so, notwithstanding the Russian threats. And we believe that these weapons are making a significant difference in helping the Ukrainians defend themselves. Of course, we’re merely helping provide the tools. The courage and the bravery and the frontline skill of these fighters is ultimately what’s making the difference and the courage, bravery and skill of ordinary Ukrainian citizens, standing up and defending their towns and cities is what’s making the difference, and we will continue to support them in their effort to ensure that Ukraine is a strategic failure for Vladimir Putin.”

How far this supply resolve goes is an unknown. Sullivan reiterated the reluctance of the United States to escalate involvement yet again.

This “send parts and hope for the best” strategy is wearing thin on the Ukrainians. In his interview on CBS Face The Nation, Ukraine Minister of Foreign Affairs Demytro Kubela commented on the continuing saga of transferring Polish Mig-29s to his country,

MARGARET BRENNAN: Well, President Biden approved another two hundred million in weapons, but those are small arms, anti-aircraft as well. There is the promise that Congress will be sending more money your way. What specific types of weapons do you need? What kind of sophisticated systems?

KULEBA: Well, the highest demand is in planes, in fighting- fighting jets, in attack aircraft because unfortunately, the air force power of Russia and Ukraine are uncomparable. And yes, it’s true that we shoot them down, but they also- they also shoot us down. And if we lose control over the sky, we cannot prevent two things from happening. We cannot prevent- we cannot stop Russian bombers, destroy our cities and killing civilians. And we cannot destroy Russian columns heading towards our big cities on the roads. To achieve these two purposes, we need more planes. This is the- the most pressing issue. We- frankly speaking, we don’t understand all the explanations that we are given, why we should not be- why we should not be given those planes and we will continue putting pressure on our- and from all corners and requesting this assistance from the United States and other partners.

MARGARET BRENNAN: It was on this program last Sunday that the Secretary of State Antony Blinken said the decision by Poland to provide fighter jets to Ukraine gets a green light from the United States. Then, days later, President Biden spiked that. Do you have a sense that any country will give you fighter jets?

KULEBA: Well, it’s- frankly everything that happens over the fighting jets in the last week is kind of a diplomatic mystery. On the one hand, everyone is ready to do it- to do it, but nothing is happening and we are not getting the planes. It reminds me of other ping pong game where every side throws the ball to the other side and gets it back. We have no time for this kind of ping pong diplomacy. We need planes to save lives of our people and to stop Rus- to stop, to put an end to Russian domination in the sky. And I ask as foreign minister and I beg as Ukrainian to find common ground on this issue and provide Ukraine with what it needs to defend itself.

MARGARET BRENNAN: The United States argues giving these jets would be escalatory and a risk to NATO, a risk to United States, and that you have things like drones that work just fine.

KULEBA: I – to my view, this logic is flawed because the drones are not escalatory and planes are escalatory. What is the logic behind it? Anti-tank weapons are not escalatory and planes are escalatory. First, what else Russia has to do for everyone to understand that they already reached the peak of escalation? They used, as I mentioned in the beginning, weapons prohibited by the international conventions. Why are we so afraid of another- another escalation? We need- we need to defend ourselves. And then the second point that I’m hearing is that planes are offensive weapons, and therefore they can not be supplied because the partner is only supplying defensive weapons to Ukraine. I’m sorry, but all weapons given to us are defensive by definition, because they are being used to defend this country. And I don’t understand what else has to happen, what kind of atrocity has to be committed for foreigners to put all this flawed arguments aside and finally provide us with what we need.

As for me, my military analyst roots have taken note that if the Russians are shifting their campaign strategy to one of choking off Ukraine’s ability to fight its ground war, more sophisticated weaponry to interdict these attacks and to also interdict Russia’s supply lines will be needed by the Ukrainians to keep the warfare stalemate in balance. The Russians are now using deeper reaching missiles with tight center of error probability (CEP) accuracy like the ones used to attack the ICPS base in Lviv – new generals, new techniques. That’s going to take more sophisticated air defenses to keep at bay, on the order of US Patriots or Israeli Iron Domes. The weak link in the Russian system is still their ground game; but only as long as the Ukrainians have the means to wage theirs. Mr. Putin’s revised Kremlin team is not waiting around for the US and NATO to ponder our belly buttons.

The Russian “broadening of target sets” isn’t limited to military supplies. The shelling and shooting of civilians increased markedly with the changing of the guard in Russian military leadership reported on the 11th of March. A common Russian story, as noted by freelance reporter Hollie McKay, who described the attack on a children’s hospital in Mariupol as a case of the Russians falsely claiming that military units were operating on the grounds of the civilian center, thus making it a legitimate military target. It’s a flimsy excuse that can be used to paint propaganda for domestic consumption favoring the Russian image as heroic. It’s a flimsy excuse to justify pounding every neighborhood, church, hospital, train station, and building in Ukraine into rubble. It’s not heroic. It’s deliberate and congruent with the ominous portents of the Kremlin intrigue described at the beginning of this piece.

As to indiscriminate shooting, American journalist Brent Renaud paid for it with his life overnight in the Kyiv suburb of Irpin, an area RedState previously noted in our reporting. Renaud joins other civilians caught in the line of fire of a very intense ground war. The sad fact is that this is typical of the dangers Ukraine’s population faces as the Russian military resorts to siege terrorism to wear down the will of Ukraine to persevere. Going back to the Kremlin tea leaves, the Ukrainian people are a Russian military target.

Minister Kubela said this in his interview,

“What we’ve been seeing in recent three weeks is a series of deliberately committed war crimes, crimes against humanity. And when they bomb hospitals, maternity houses, schools, when they kill civilians passing by trying to be evacuated from the war zone, that, of course, indicates that they are trying to break us down and to destroy us.”

With no solution to ending the conflict in sight, on Sunday, March 13, a very somber Pope Francis noted,

“The only thing to do is stop this unacceptable armed aggression before it reduces cities into cemeteries.”