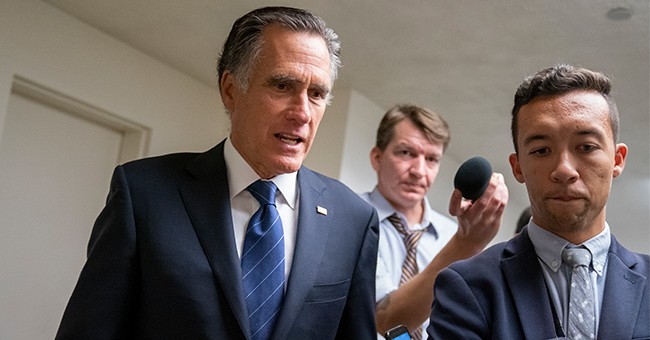 The “severely conservative” senator from Utah decided to take to social media and trash Tulsi Gabbard. But he didn’t just disagree with her viewpoint. Rather, he actually accused her of treason.

Given the timing of Romney’s outburst, it can only be in relation to one Gabbard comment because she’s only posted one thing in the last two days. Here’s what she had to say.

For the life of me, I can’t figure out why establishment figures are so triggered by the mention of the bio-labs in Ukraine. They absolutely exist. The United States has been helping fund them, including offering direct support, as part of a 2005 agreement to contain and manage hazardous materials at the labs. Notice that Gabbard makes no further claims about bio-weapons and the like. She only cites the risk of deadly pathogens being released, which is factually true in regards to the current risks.

So why is Romney freaking out? Is it really so difficult to say “Yeah, the labs are there, but there’s nothing nefarious going on?” Instead, figures like the Utah senator and various “fact-checkers” rush to scream “Russia propaganda” while claiming it’s misinformation to even acknowledge their existence. Even dumber, it is the Pentagon that is warning that Russia could capture one of the labs lab and carry out an attack with its contents.

Try to square that circle.

Regardless, my big issue here isn’t who’s right or wrong on the merits. Rather, it’s the ridiculous use of the word “treason” by Romney. I get the dude is a neocon, but come on, treason is not defined as whatever you want it to be. The United States is not at war with Russia. Gabbard, misguided or not, is not offering aid and comfort to an enemy nation, a legal standard that goes well beyond the expression of free speech. Joe Biden is currently working with the Russians to try to secure an Iran deal. Is Biden now guilty of treason in Romney’s eyes?

Out of all the things that are dangerous in regards to what’s going on with Russia right now, Tulsi Gabbard saying something on Twitter doesn’t even register. Yet, in true Romney fashion, he has chosen to lash out at everyone but those who are most responsible for the current crisis. When it comes to Biden, Romney always chooses his words carefully, usually not naming the president. When it comes to Gabbard (or a Republican), he comes out guns blazing. That’s not a coincidence.

You can disagree with someone without being ridiculous about it. Romney’s comments are hysterical and dumb. That some people actually think this guy is the best Republican nominee in 2024 because he said something negative about Russia in 2012 is even dumber. Romney is a flip-flopping establishment neocon, and that will never be accepted by the broader Republican Party again, and for good reason.