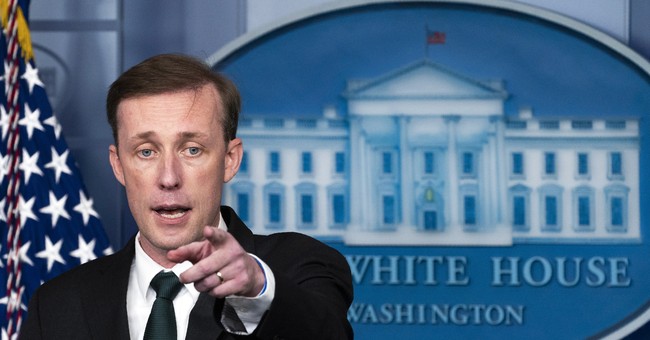 As I wrote earlier in the killing of an American journalist by the Russians in Ukraine, the Biden Administration just continues to project weakness at every turn.

White House National Security Adviser Jake Sullivan was making the rounds of the Sunday shows this morning, and he was asked both about Ukraine and the missile attack targeting the U.S. Consulate in Erbil, Iraq on Saturday.

Here’s an Iranian social channel claiming it was an attack on the “Mossad’s den of espionage.”

But you would think that the White House would have a swift reaction to the targeting of the U.S. Consulate to punish the Iranians, or that at least they would be immediately cutting off discussions on the horrible Iran Deal that they have been trying to push through. No such luck. So far, there has been no military response reported to the attack.

Sullivan was asked about their response by “Face the Nation” host Margaret Brennan.

“Iran’s Revolutionary Guard has now claimed responsibility for firing ballistic missiles into northern Iraq towards a location where the US consulate is located. Are you condemning Iran for carrying out this attack?”

Sullivan said they condemned it, but then he seemed to downplay it, adding that no one was hurt.

“We’re still gathering information on what precisely the target was. What we know at this hour, Margaret, is that no U.S. facilities were hit. No U.S. persons were harmed. But the United States is absolutely clear, we will do whatever it takes to defend our people, our interests, and our allies, and we are in consultation with the Iraqi government and the government in Iraqi Kurdistan, in part to help them get the missile defense capabilities to be able to defend themselves in their cities-

So they get a bye because they’re lousy shots? And he can’t even say now that Iran alleged targeting a U.S. Consulate would cut off the Iran Deal?

And they wonder why the world thinks they are weak and wouldn’t respond? They are damaging the reputation of the United States before the world, and that gives thoughts to all the bad actors in the world.

Then Sullivan also responded to the question of chemical weapons being used in Ukraine.

MARGARET BRENNAN: Jake, there are reports of white phosphorus being used in Ukraine, reports of chlorine gas. How imminent is a chemical weapons attack in Ukraine?

SULLIVAN: We can’t predict a time or place. All we can say is that there is an escalating level of rhetoric on the Russian side trying to accuse the Ukrainians and the United States of potentially using chemical or biological weapons. And that’s a tell, Margaret. That’s an indicator that in fact, the Russians are getting ready to do it and try and pin the blame elsewhere, and nobody should fall for that. That is why we’ve gone out so decisively at the United Nations Security Council and elsewhere to rob the Russians of the capacity to pin this on anyone other than themselves. And as the president said on Friday, if in fact, the Russians do use chemical weapons in Ukraine, they will pay a severe price.

Sullivan wouldn’t define what “severe price” meant, nor would he say if it would be a “game-changer.” He did say it would be a “shocking additional line that Putin is crossing,” if he did it.

Sullivan also refused to tell “Meet the Press” host Chuck Todd what that “severe price” would be.

The problem now is that Putin isn’t put off by this, and people don’t think the Biden team means it — when they use these terms and don’t respond appropriately to things like an attack on the U.S. Consulate. That didn’t even earn a “severe price if true” comment. It was more like “oh well, no one was hurt.”

“No harm, no foul,” in other words. Putin already knows that Biden has taken any U.S. military involvement off the table, so he has nothing to be concerned about from that. This puts us in great danger, when you have responses like this.