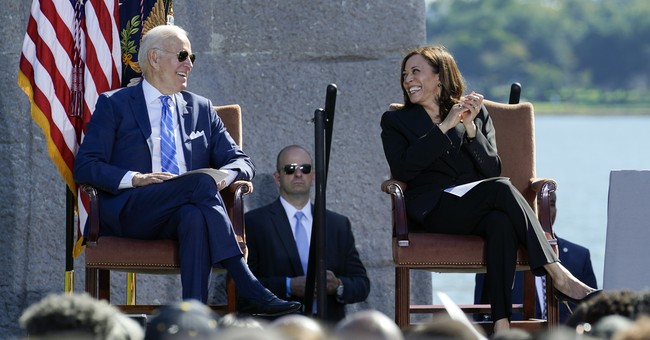 The Democrats held a Democratic National Committee general session in Washington, D.C., on Saturday. Both Joe Biden and Kamala Harris were in attendance. It’s the first time they’ve had such a meeting in person since the pandemic hit.

Biden was pitching a lie — that the Democrats “brought the economy back.”

First, it was Democrats behind many of the more lengthy and severe lockdowns that caused the economy to crash. Then the economy had been coming back, when the Democrats insisted on putting through the American Rescue Plan, which is now largely blamed for the inflation that is crushing Americans. To claim a great economy, as Americans are suffering so under the weight of skyrocketing prices is to be completely out of touch about what is going on and what Americans are thinking, not to mention Biden’s part in it all.

Kamala Harris added to that disconnect with what she said at the event. “Our task is to show people that, in many ways, they got what they ordered,” Harris declared.

You can hear the very hesitant claps in response to that, because the Democrats in the audience know that isn’t going to go over well with the American people, who feel that they got something very far different from “what they ordered.” They didn’t order Carter levels of inflation. They didn’t order having to worry about if they can afford to pay for gas to be able to go to work. They for sure didn’t order up a war in Europe that a weak Joe Biden may have helped to bring on. If they try to make a sale telling people, “you got what you wanted,” they might not like the response they’re going to get.

This isn’t the first time that Kamala has said something like that. And the first time she said it, it sounded like she was taking a swipe at Joe Biden.

Harris also commented on the situation in Ukraine. But her comment has a lot of people wondering if she even understands what’s going on.

“So, I will say what I know we all say and I will say over and over again, the United States stands firmly with the Ukrainian people in defense of the NATO Alliance,” Harris exclaimed.

Huh, what? When did Ukraine become part of NATO? I think I must have missed that. Surely, Harris can’t think that? That’s an incredibly important thing to be clear about, and it doesn’t sound like she is. She already showed that she wasn’t even clear-when she was visiting Poland-that she was talking about being on the Eastern Flank. At least she didn’t call Ukrainians “Iranians,” as Biden did when he referred to Ukrainians during his State of the Union address earlier in March.

Now, it’s very important that she have proper understanding, because we’ve already seen what their incompetence can lead to. So, the media should be accurate about what she said. But Fox added in an “and,” where it’s very clear that she didn’t say “and.” When you do that, you change the nature of what was said.