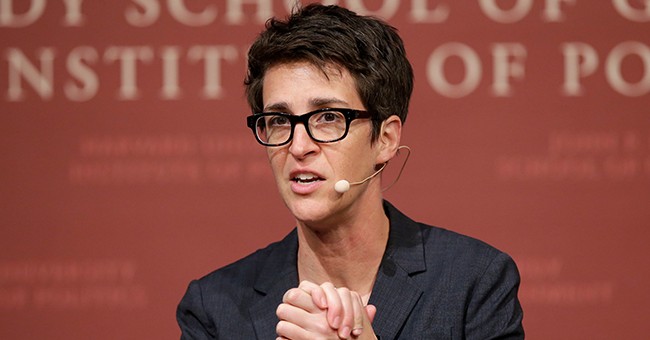 If you’re going to “The Rachel Maddow Show” hoping to get straight news, you’re definitely looking in the wrong place. It’s a festival of misinformation as we noted in the past, on everything from Russia collusion to COVID.

The MSNBC program got into trouble on Friday night over comments former U.S. Ambassador to Russia under Barack Obama Michael McFaul made on the show, which were then tweeted out on the account for Maddow’s show blog.

McFaul – who is also a professor at Stanford – violated one of the basic rules of the internet: don’t compare things to Hitler. McFaul was talking about how horrible the war in Ukraine was, and he cited remarks a Russian journalist made on Ukrainian television.

“One of the Russian journalists said, ‘You know, there’s one difference between Hitler when he was coming in and Putin. Hitler didn’t kill ethnic Germans. He didn’t kill German-speaking people,” McFaul said to fill-in host Ali Velshi on Friday.

“I think people need to remember that we’re talking about cities like Kharkiv and Mariupol and Kyiv, there are large populations there, you know, up to a third and sometimes as much to a half that are Russian speakers and are ethnic Russians. And yet Putin doesn’t seem to care about that. He slaughters the very people he said he has come to liberate,” McFaul said.

Then, to make it worse, the Maddow Blog account tweeted a paraphrasing of it: “One difference between Putin and Hitler is that Hitler didn’t kill ethnic Germans, German-speaking people. Putin slaughters the very people he said he has come to liberate.”

Now you don’t have to know a lot of history to know Hitler and the Nazis killed a lot of ethnic Germans and German-speaking people, including Jews and the disabled. This also feeds the propaganda that Jews were not actually “German.” You don’t have to make Putin look worse by making Adolf Hitler look better.

Even the Auschwitz Memorial called them out.

After the tweet was up for hours, with some on the left trying to excuse it while others started flipping out over it, the account finally deleted it, saying they were wrong.

McFaul also apologized, saying he was referring to ‘ethnic Germans’ other than in Germany.

“I slipped late last night and violated an unwritten taboo- never compare Hitler with anyone. I agree. He was incomparably evil. I won’t do it again,” McFaul tweeted. “To those who wrote to me to explain that Hitler committed the same atrocities against ethnic Germans that Putin is committing against ethnic Russians today in Mariupol and Kharkiv, please suggested to me the best scholarly readings on this history. Im eager to learn.”

But then he made it worse, suggesting that Jews could not be “ethnic Germans.”

The bottom line is if you argue that somehow someone did something worse than Hitler, you went to the wrong place to begin with. Just stop and don’t keep digging. Putin invaded Ukraine and is killing people, which is bad enough. He’s not Hitler and you don’t have to make a comparison to somehow make him seem worse.