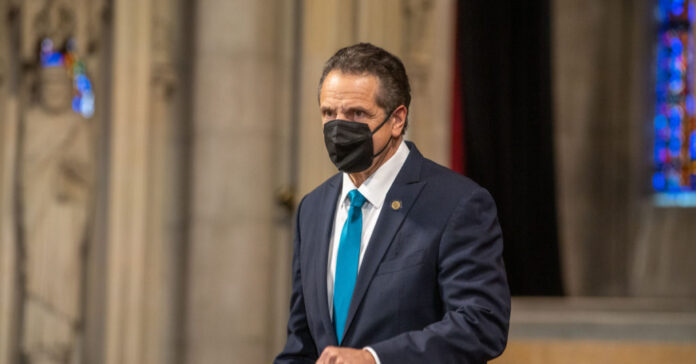 A bit over six months ago, Andrew Cuomo resigned and started lurking in the shadows. The serial sexual harasser has been keeping a low profile. His daughter Michaela, however, kept the family flame going by pushing her own sexually charged ‘art’ and other things on the unsuspecting public while talking nonstop about her ‘pleasure portal’. What a proud papa he must be.

Just like his papa Mario, he just couldn’t stay hidden. He chose this past weekend to pop up at a Brooklyn church of all things. Looking like he had just done an all-night bender at a local back-alley casino room, Cuomo took to the pulpit to deliver a planned rant about everything in his life that had gone wrong. With a few dozen people in attendance, the applause was very scattered and ill-timed through most of the performance that was also live-streamed.

Using this opportunity to plant the seeds of his political comeback, Cuomo ranted about cancel culture, the impacts of these investigations on his family, and how he feels as if his political opponents saw the signs to attack him, and they were unrelenting. “Any accusation can trigger condemnation without facts or due process. We are a nation of laws, not a nation of tweets. Woe unto us if we allow that to become our new justice system… The Bible teaches perseverance, it teaches us to get off the mat. They broke my heart, but they didn’t break my spirit. I want to take the energy that could have made me bitter and make us better.”

This kind of statement is incredibly shocking after Democratic state Attorney General Letitia James released a report last summer detailing his harassment of 11 women. The report detailed how he and his aides also conspired together to go after one of his accusers directly and without any regard for her well-being. As a result of the investigation, he resigned and left the office quickly. Several district attorneys also performed investigations, and found credibility in the accusations, but felt that the evidence was not quite strong enough to pursue criminal charges.

Andrew’s younger brother Chris found himself also on the receiving end of these accusations. As Andrew had been a frequent guest on his CNN talk show when Chris was leaving out the accusations against Andrew from his show, and at times defending him when pressed on the issue, he was let go. This was something Andrew did not forget. “He had nothing to do with anything. They fired him and they said he violated a journalistic rule — he wasn’t reporting on the story, he wasn’t a journalist. He was a brother.”

Unfortunately for Andrew, that is a journalistic rule if you want to be taken seriously and maintain your integrity. Chris knew that, and it was a risk he was willing to take to stand by the Cuomo name. Much like their daddy Mario, neither boy knows how to admit when they make a mistake, or how to apologize.

As Andrew gears up to try and get back into politics, one can only hope he changes his mind. If you’ve ever been to the great state of New York, you’ve likely seen the results of his handiwork. The horrible roads, poorly funded schools, people leaving in droves, and negative job growth are all results of his leadership. He cannot lead, and these cases give an ever broader justification to keep this man out of politics. You would think the people of NY would have learned from Mario, but they never did. Maybe now they have?