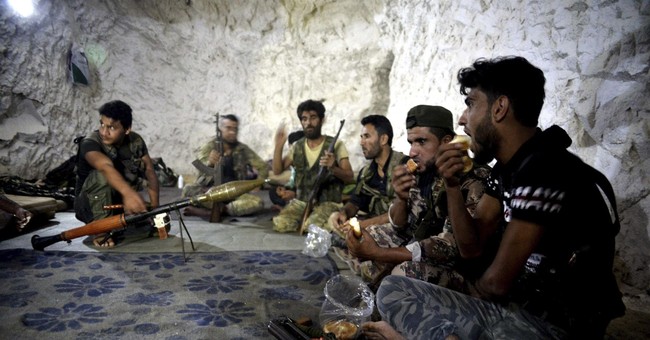 According to an “exclusive” run by the Wall Street Journal on Sunday, Russia is actively recruiting Syrian fighters for duty in Ukraine.

An American assessment indicates that Russia, which has been operating inside Syria since 2015, has in recent days been recruiting fighters from there, hoping their expertise in urban combat can help take Kyiv and deal a devastating blow to the Ukraine government, according to four American officials. The move points to a potential escalation of fighting in Ukraine, experts said.

It is unclear how many fighters have been identified, but some are already in Russia preparing to enter the conflict, according to one official.

Officials declined to elaborate on what else is known about the deployment of Syrian fighters to Ukraine, the status or precise scale of the effort.

According to a publication based in Deir Ezzor, Syria, Russia has offered volunteers from the country between $200 and $300 “to go to Ukraine and operate as guards” for six months at a time.

Syrian fighters have spent nearly a decade fighting urban warfare, while Russia’s largely conscripted force lacks this skill set. Ms. Cafarella said Syrian forces deployed to Ukraine could also be asked to work a support role, based on how they worked in Syria with the Wagner Group, a mercenary force that some see as a proxy for the Russian government.

In ordinary times, one would be inclined to file this under “cool story, bruh” and move on. None of the indigenous forces operating in Syria, be they troops loyal to Assad or the various militias, have given off a vibe that says “elite military unit.” On the contrary, they look like crap, and none of their operations is something a respectable military would emulate. The whole “experience” argument is nonsense. You show me a man who has spent a decade in actual combat, and I’ll show you a guy who twitches a lot and pees on himself if someone pops a beer can. Add to that the fact that language differences would make interoperability with Russian Army troops nearly impossible, and the Syrians would be introduced to Ukrainian weather and terrain at the same time; this is just one of those really bad ideas that every conflict produces. The story disappeared, lending more credence to the theory that this was not real in the first place.

This looks like it may be real. Russian state television has been showing this video.

The reality of the recruiting effort has been confirmed by Vladimir Putin’s sockpuppet, Dmitry Peskov, and Defense Minister Sergei Shoigu.

The Kremlin said Friday that fighters from Syria and the Middle East would be allowed to fight for Russia in Ukraine, after President Vladimir Putin backed a plan to send volunteers to battle there.

Kremlin spokesman Dmitry Peskov told reporters that Russia’s defence minister had said that “most of those who want and who asked (to fight) are citizens of Middle East countries and Syrians”.

Russia was a key partner to Syrian President Bashar al-Assad when war broke out, rallying to his side in the conflict in 2015 and turning the tide of the fighting in the regime’s favour.

Peskov said the decision to send volunteer fighters to Ukraine was acceptable, claiming that the United States was backing measures to send mercenaries to fight alongside Kyiv’s army in Ukraine.

“If the West is so enthusiastic about the arrival of mercenaries, then we also have volunteers who want to participate,” Peskov told journalists.

(Luttwak is a strategist I’ve had a love/hate relationship with for decades, not a Twitter rando despite the lack of a blue checkmark.)

There are two possibilities that explain what is going on.

The first possibility is that Putin is after a public relations response to the large number of real soldiers, from real armies, with real experience and real training heading to Ukraine. While the Russians call them “mercenaries,” the foreign volunteers are supposed to be integrated into the Ukrainian territorial defense forces. The arrangement described by Ukraine seems to legally insulate the foreign volunteers from the charge of being mercenaries, and Ukraine signed the International Convention against the Recruitment, Use, Financing and Training of Mercenaries though Russia did not, so it is hard to see what they are griping about. Russia doesn’t want it to look like Ukraine, alone, has international backing.

The second possibility is that there is actually a need for the Syrian cannon fodder, sorry, I mean fighters. After the first week of the war, Russia admitted to some 2,600 casualties (approximately 500 dead and 2,100 wounded (see Russia Releases the First Official Casualty Count From Its Ukraine Adventure). It is doubtful that Russia lost fewer men this week. It is also doubtful they have disclosed the total number of dead, wounded, prisoners, and deserted soldiers. The low-ball number from official sources that are not Russian or Ukrainian is 2,000 dead. From that, we can extrapolate another 7,000 wounded. We also know that Russia has acknowledged that conscripts have been added to the forces in Ukraine where three days ago Putin publicly promised conscripts would not be used. Pushing several thousand Syrians into the front lines would save Putin from pulling additional units from Russia and feeding them into Ukraine. At least for a short while.