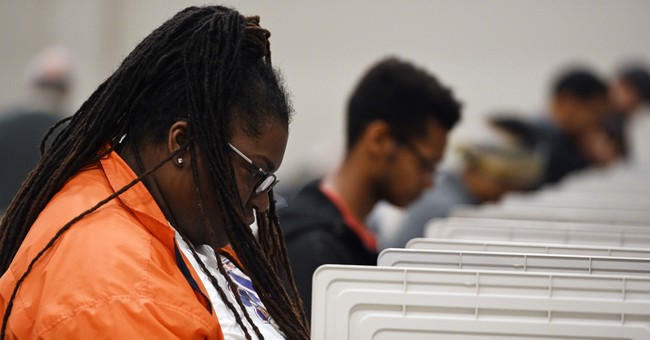 Democrats have finally fouled things up so badly that even a critical part of their voting base is leaving the building. A recent poll reveals that support for the party among minority voters has taken a significant dive over the past year, and if this trend continues, it could have ramifications even beyond the upcoming midterm elections.

The Wall Street Journal released the results of a poll on Friday analyzing American attitudes towards President Joe Biden’s performance in office, among other issues. But one result that will almost assuredly be ignored by the activist media is the reality that Democrats are faring horribly with minority voters, when compared to their typical performance.

The Republicans have greatly benefited from the fact that Democrats seem intent on fouling everything up. Turns out refusing to follow through on their promises wasn’t the best strategy for the left. Indeed, black voters, in particular, have been increasingly dissatisfied with President Biden, who made sweeping promises to repay the community for their support, but so far has only succeeded in replacing menthol cigarettes with crack pipes.

Julian Acciard, a black conservative candidate running for Congress in New Hampshire, told RedState that the results of the poll indicate that there is an opportunity for the Republican Party to win over more minority voters. “The GOP has an opportunity to win the next generation and 30 years of dominance, if they lean into our party legacy. The original pro-black, pro-woman, pro-Asian, pro-Hispanic, and pro-liberty party is back on the rise,” he said.

Acciard continued, stressing the need for Republicans to step up their efforts to attract nonwhite voters:

Like it or not, identity politics is reality, and it’s played just as often by the GOP as it is by the DNC. In order to break the hold on these voters, the national party needs to think creatively and address the issues minorities see with solutions based on conservative principles of governance.

The candidate suggested that the GOP stop relying on “talking points,” and instead, “take every opportunity on air and from the pulpit to pitch actual policy.”

Darvio Morrow, co-host of “The Outlaws Radio Show” and the founder of the FCB Network, also noted that these numbers could be the harbinger of a major shift in the upcoming midterms. “This could be a transformative election,” he said. “I’ve never seen a mainstream poll show that high of black support for Republican congressional candidates. The GOP has a unique opportunity, if they seize it.”

Democrats have much to fear in November, if these numbers are accurate. Much of the party’s success has relied on the votes of non-white Americans. Since the GOP has eschewed the idea of actually engaging with these groups over the past 60 years, it wasn’t hard for the left to get their support. But, in the words of Bob Dylan, it seems the times, they are a-changin’. The Republican Party appears to be finally understanding the importance of winning over black and brown voters.

Of course, it is also important to remember that the GOP still has a ways to go before it succeeds at positioning itself to be a viable alternative to the Democrats. Again, if these numbers are accurate, it is likely more a case of Democrats alienating Latinos and African Americans than it is of the GOP persuading them to abandon their party. Nevertheless, this new trend is a promising sign for Republicans. The question is: Will they seize the opportunity?