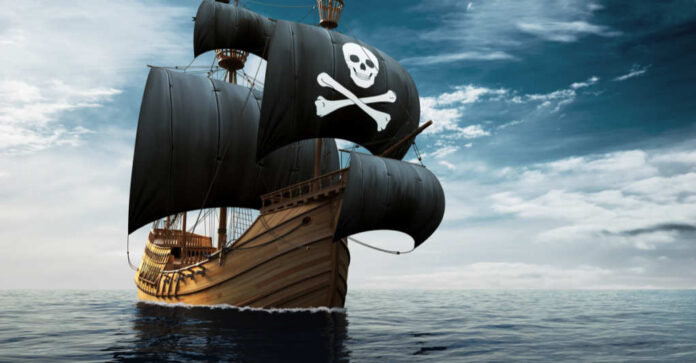 In the United States, we’re told not to touch things that don’t belong to us. Even when we’re out at sea, we still follow the law.

Pirates, on the other hand, plunder. They steal goods when they’re out at sea so that they continue to have the supplies they need. Even when they don’t need supplies, they still plunder so that they can obtain riches.

One Representative out of Texas (where else?) thinks he has the solution to deal with the Russian problem – turn Americans into pirates.

Representative Lance Gooden (R-TX) has introduced a bill to Congress that would authorize President Biden to issue letters of “marque and reprisal” to seize Russian property.

Oh, this isn’t a joke. Now, if you’re not sure what a letter of marque and reprisal is, it’s because it’s an available piece of legislation that hasn’t been used since the War of 1812. It was used in the Age of Sail so that privately owned ships had the ability to capture enemy merchant ships.

Gooden would need the bill passed in order for people to feel as though they can plunder in the High Seas. He explains that “Corrupt Russian oligarchs have enabled Putin’s war. That’s why I have introduced legislation to allow U.S. citizens to SEIZE yachts and jets of sanctioned Russians.”

This might be taking things a bit too far. The average citizen doesn’t know anything about seizing yachts and jets. This might be suitable for those who are bounty hunters and repossession agents…but the average Karen should not be getting a letter of marque and reprisal.

The only ones who would be getting such letters would be ones who are perfectly capable to carry out an act of war. Think of it as similar to deputizing a citizen so that the police can hunt down the bad guys more effectively.

To be fair, the legislation would create privateers, not pirates – but the difference between the two is a very thin line.

Gooden recently told The Hill that “Russian yachts are already on the move and if the Biden Administration and our allies in Europe fail to act quickly these vessels will soon be out of our reach.”

The Texas Representative does make an important point. There are Russian leaders and people of influence who have allowed Putin to have this power that he’s exerting onto Ukraine. If something isn’t done soon, Putin will not only conquer Ukraine but also feel entitled to move onto the Baltic states.

One of the ways to get the various oligarchs to stop in their tracks is to seize their property. However, shouldn’t this be done by trained professionals? Shouldn’t members of the military be tasked with this? After all, it’s unlikely that yachts and jets are just sitting around unattended. Anyone who tries to seize one could be met with significant Commie force.

International treaties have already rendered the letters of marque nearly obsolete, but they’ve never actually been removed from the Constitution.

If Gooden’s bill were to pass, it would require anyone receiving a letter to surrender anything seized over to the U.S. government. As for whether there would be any payment, it’s not mentioned. So, we could be looking at considerable bragging rights for anyone who is able to board Putin’s superyacht…

Again, though, don’t hold your breath on this being passed.