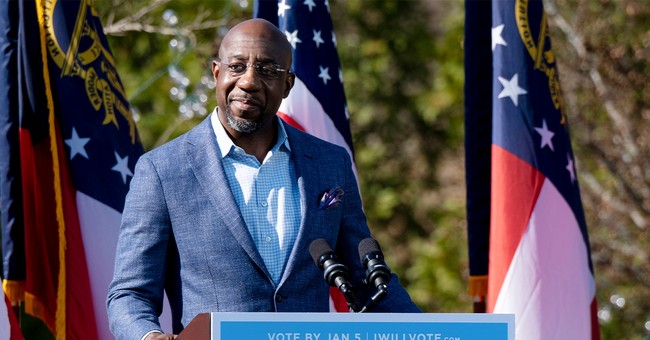 As Americans continue to express their frustrations with the failed “leadership” shown by President Joe Biden, down-ballot Democrats are poised to pay the price come the midterm elections in November.

In particular, Georgia is being viewed as a “bellwether” of sorts by some political observers who have suggested that if it’s a bad night for Democrats there, then it will be everywhere.

If that ends up being the case, the early warning signs for Georgia Democrats aren’t good. Recent polls have shown competitive races that have given both Gov. Brian Kemp and former Sen. David Perdue clear advantages over Democrat Stacey Abrams in hypothetical matchups, and have given potential GOP Senate nominee Herschel Walker an edge in a possible matchup against Sen. Raphael Warnock.

But a new poll released Tuesday shows what are perhaps the biggest warning signs to date for Warnock, with him being down by four points against Walker. The kicker here is that it’s a Democrat-run polling outfit, which you’d think would show him at least even with Walker considering how often partisan pollsters skew results in their favor to create a sense of momentum:

In fact, as of this writing, of the few polls taken so far in this Senate race the only one that has shown Warnock ahead is the one run by the heavily biased left-wingers at Public Policy Polling from back in August showing Warnock up by two.

Not helping Warnock is the fact that Joe Biden is underwater in Georgia with a 34% approval rating at last check. That number is unlikely to get any better in the coming weeks as gas prices and inflation continue to get worse, something Walker is keenly aware of:

Warnock appears to be aware of how much Biden is dragging the Democrat ticket down, too, considering he and other vulnerable Democrats are laughably pretending to be taxcutters fighting for the little guy as Americans feel the pinch at the gas pump and at the grocery store.

As I’ve said before, whoever the eventual Republican nominee is, it’s imperative that not only they remind voters of how important it is to have a GOP majority in the event Joe Biden gets to nominate another Supreme Court Justice, but also to jog memories on how Warnock sided with Joe Biden in sabotaging Georgia during the heated debate over the 2021 election reform bill, which saw Major League Baseball pull the All-Star game, which hurt the very minority voters Warnock, Abrams, and Biden claimed they wanted to protect.

Warnock later tried to kinda-sorta walk back his comments about the bill, but that was after the damage had been done.

Georgia voters should respond accordingly come election time and throw him out.