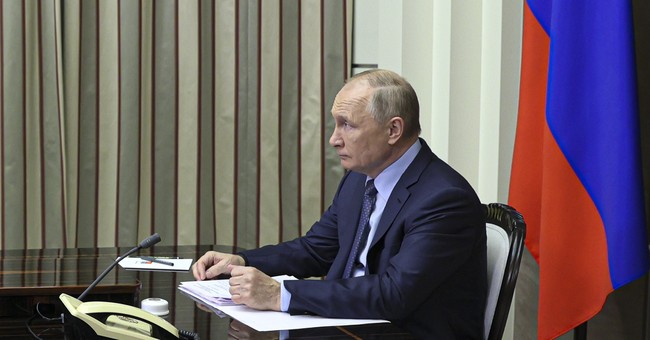 The Russian terror campaign against Ukrainian civilians continues unabated even as its military operations resemble something dreamed up by the Three Stooges. On Wednesday, the Russian Air Force bombed a maternity hospital in the besieged city of Mariupol. They claimed that a very pregnant wounded woman, who happens to be a Ukrainian beauty blogger was a “crisis actor” (Alex Jones needs to demand royalties for this) before deleting their tweet. The Russians are claiming, without a shred of evidence, that the hospital was used for military purposes, that they had notified the UN (apparently in secret) that the hospital was being improperly used, and that they were “baited” into the attack. I have doubts that the attack was deliberate. The Russians seem to have stopped using precision-guided munitions for their air attacks and rely on gravity or “dumb” bombs. The presence of Stinger MANPADS forces the survival-oriented pilot to fly higher than 10,000 feet. At that altitude and going at high speed, it is doubtful that there is a Russian pilot who could hit anything smaller than the city. (Russian pilots fly about 8 hours per month, that is barely enough to keep flight qualified.) The Russian intent appears to be something out of the Blitz of London. That is, they plan to bomb the city at random to try to terrorize the civilian population. This attack goes along with the Russians mining evacuation routes from Mariupol knowing civilians would be using them.

As these war crimes are unfolding before us, Dmitri Peskov, Kremlin spokesman and Putin Minime, sniveled about how mean the West was being to Russia. He declared that the West was waging “economic warfare” against Russia while all Russia was doing was killing women and children for the sole purpose of showing they could. He is also quoted in Interfax playing the victim:

“We have said repeatedly that Moscow was, is and will be a reliable guarantor of energy security not only for the European continent, but also at the global level. And even now, as you see, energy resources are being supplied,” Peskov told reporters, responding to a question from Interfax as to whether Russia is ready to continue supplying energy resources to countries that have supported the sanctions.

“And Russia values this reputation of a reliable supplier of energy resources. The European leaders unanimously admit that Russia is fulfilling its obligations under all current contracts continually and in full. But you see the bacchanalia, hostile bacchanalia carried out by the countries of the collective West, which, of course, makes the situation very difficult and makes us seriously ponder it,” he said.

I’d like to make two observations on his statement. I think Peskov got drunk and buggered his thesaurus (NTTAWWT) to come up with “hostile bacchanalia.” The reason that Russia is a “reliable guarantor of energy security” is because they get paid and energy exports are not subject to sanctions so it is crucial to Russia that they deliver agreed quantities of oil and gas and do so on time.

Is there an economic war underway against Russia? Not yet. Most Russian banks have not been sanctioned. Energy, food, pharmaceuticals, and medical supplies can be imported/exported without any problem. But Russia is getting an idea of what economic warfare looks like.

U.S. and European financial penalties and restrictions are throttling banks and other businesses in Russia and in Belarus, its ally, limiting the Russian government’s ability to use its enormous foreign currency reserves, and impeding millions of Russians from using their credit cards, accessing their bank deposits or traveling abroad. Foreign assets of wealthy individuals and businesses allied with the Kremlin have been frozen. The European Union on Wednesday expanded the list of directly sanctioned people and organizations to nearly 1,000.

Rating agencies have sharply downgraded the Russian government’s credit, signaling that it may be unable to pay creditors. Fitch Ratings warned on Tuesday that in its view, “default is imminent.”

Hundreds of Western businesses — manufacturers, oil companies, retailers and fast-food chains like McDonald’s — have suspended operations in Russia; Mr. Peskov said Wednesday that he hoped the number of Russians left unemployed by the exodus “would not be in the millions.” Russian lawmakers are considering nationalizing the assets of foreign companies that leave in response to the war.

There are some Americans who see sanctions as “driving Russia into China’s arms.” The downside of such an event escapes me. China doesn’t need what Russia has to export and can’t get it economically as Russia’s lines of communications and transport run to Western Europe. If Putin has sand in his thong about Ukraine’s NATO membership being a threat, why would he allow Russia, with a GDP about equal to Texas, to enter into a close relationship with the #2 economy in the world?

But can China provide Putin with an economic lifeline? I’d say no, for four reasons.

First, China, despite being an economic powerhouse, isn’t in a position to supply some things Russia needs, like spare parts for Western-made airplanes and high-end semiconductor chips.

Second, while China itself isn’t joining in the sanctions, it is deeply integrated into the world economy. This means that Chinese banks and other businesses, like Western corporations, may engage in self-sanctioning — that is, they’ll be reluctant to deal with Russia for fear of a backlash from consumers and regulators in more important markets.

Third, China and Russia are very far apart geographically. Yes, they share a border. But most of Russia’s economy is west of the Urals, while most of China’s is near its east coast. Beijing is 3,500 miles from Moscow, and the only practical way to move stuff across that vast expanse is via a handful of train lines that are already overstressed.

Finally, a point I don’t think gets enough emphasis is the extreme difference in economic power between Russia and China.

Some politicians are warning about a possible “arc of autocracy” reminiscent of the World War II Axis — and given the atrocities underway, that’s not an outlandish comparison. But the partners in any such arc would be wildly unequal.

Putin may dream of restoring Soviet-era greatness, but China’s economy, which was roughly the same size as Russia’s 30 years ago, is now 10 times as large. For comparison, Germany’s gross domestic product was only two and a half times Italy’s when the original Axis was formed.

So if you try to imagine the creation of some neofascist alliance — and again, that no longer sounds like extreme language — it would be one in which Russia would be very much the junior partner, indeed very nearly a Chinese client state. Presumably that’s not what Putin, with his imperial dreams, has in mind.

The irony of this is that Russia proceeded with the invasion of Ukraine knowing that it would be the target of economic sanctions. In fact, its financial institutions took extraordinary steps to try to limit sanctions impact.

Vladimir V. Putin’s posture toward the West through the recent Ukraine crisis seems unusually defiant, even for him. But there may be more behind his confidence than military power or empty bravado.

Over the past several years, Mr. Putin, Russia’s president, has restructured his country’s economy for the specific purpose of withstanding Western financial pressure.

Russia has drastically reduced its use of dollars, and therefore Washington’s leverage. It has stockpiled enormous currency reserves, and trimmed its budgets, to keep its economy and government services going even under isolation. It has reoriented trade and sought to replace Western imports.

Russian economic officials “are pretty proud, and have good reasons to be, for the work they have done to make the Russian economy more immune to sanctions,” said Alexander Gabuev, a senior fellow at the Carnegie Moscow Center.

This transformation, among the most dramatic examples of what is known as “sanctions-proofing” worldwide, comes less than eight years after Western sanctions over Moscow’s annexation of Crimea in 2014 mired Russia in economic and political upheaval.

Russia has not yet experienced anything like an economic war. Nothing like the full range of potential sanctions and economic actions have been brought to bear and already Putin’s Russia is reeling like an aging punch-drunk fighter despite having used the last decade to prepare for the eventuality. When all this is over, one hopes Putin has learned a valuable lesson but one doubts that he’s capable of doing so.