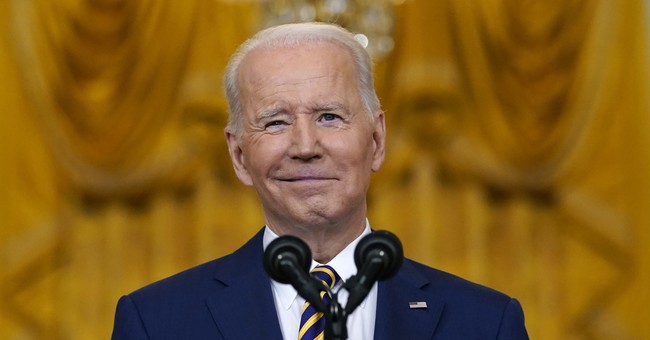 Joe Biden and his team have been doing everything they can to discourage American energy production since he came into office, with the claim that it’s necessary for their radical, climate change agenda.

Yet, Biden lied on Tuesday during his remarks about banning Russian oil, “It’s simply not true that my administration or policies are holding back domestic energy production.”

What that’s about is that they don’t want to get tagged with the rise in gas prices and suffer the consequences of the angry electorate come November. That’s why they’re also lying by calling it a “Putin price hike,” as though it just started rising when Russia invaded Ukraine; indeed, it’s been going up since the 2020 election when Biden came in.

But, they keep letting the plan slip – that the priority is their radical energy goals;that’s what it’s about.

Biden was talking with companies Wednesday about semiconductors. I’m not sure what he’s trying to say here, but it’s one heck of a jumbled word salad.

But then, he went right to the goal — getting rid of “oil products.”

We’re not anywhere close to being able to switch to electric vehicles — even if we wanted to. Not to mention oil products in general, because there’s no viable energy replacement that could both meet our present needs or the rest of the world’s needs for oil products.

They think now is the time. That’s delusional, and it’s dangerous that they are this delusional.

But, that’s how they’re using this moment.

Because that’s the plan; they even have to attack the logical solution – to drill more. Listen as Daleep Singh claims that even if they drilled as much as they could, it wouldn’t affect the price.

This is just insulting Americans’ intelligence, with this comment. More supply would drop the price; it’s basic economic understanding. We’re seeing that right now – with the prospect of cutting/banning the supply of Russian oil, the prices jump up. With the possibility of more oil from OPEC, the price drops.

Then here’s Biden National Economic Council director, Brian Deese. This is the guy who previously falsely said that if you didn’t count meat prices, inflation really wasn’t hitting food prices. Not exactly the sharpest tool in the draw.

Now, he’s saying there’s “no amount of domestic production” that would make us energy independent, and that we need to move away from fossil fuels.

That’s even though we were close to energy independence under President Donald Trump, and became a net exporter of oil. But the concept that no amount of production would get us there is just nonsense. If we used all our oil, then the variations in the world market wouldn’t be able to hold sway over us. That’s the whole point of producing our own and achieving that independence. But he’s pushing that because they don’t want fossil fuel independence; they want to do away with it.

But even as they give away the game with all this, you had Biden Energy Secretary Jennifer Granholm on Wednesday urging energy producers to produce more, as our sister site Twitchy noted. Of course, this is putting the onus on the companies, not on Biden and his restrictions — where it belongs.

I think they know they’re screwed in November, unless they say something about upping American production and deflect what blame they can – to the oil companies or Putin. But I’m just guessing that most Americans who have been alive for more than three weeks and have seen the rise that is directly traceable to Joe Biden are smart enough to know the truth.

Joe Biden and the Democrats are hitting Americans right in the pocketbook, and they will remember come November.