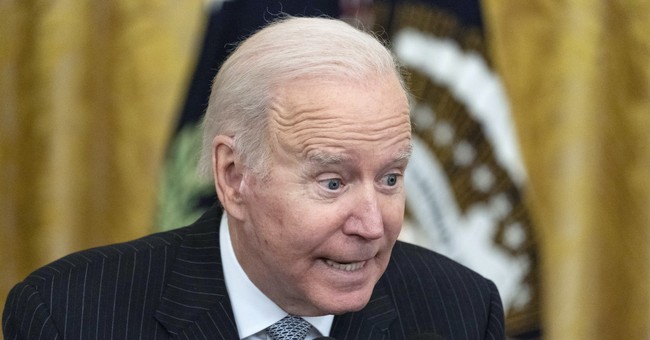 After Joe Biden’s remarks about cutting off Russian oil on Tuesday, he refused to take any questions from the press, saying that there was a lot more that needed to be “made clear” and he had to take off for Texas. Then Fox’s David Asman and Harris Faulkner obliterated him for his lie blaming the rising gas prices on Putin.

But while in Texas, not only did Biden repeat the lie that it was Putin’s fault, he completely threw up his hands and said, “It’s going to go up. Can’t do much right now. Russia is responsible.”

The gas prices were rising before Putin invaded Ukraine, they started right after the election because of the market reaction to Biden.

That’s the immediate reaction to the harm they knew was coming and then Biden lived up to their fears. So yes, you are responsible, Joe Biden. The laughing in the background on that video just twists the knife in a little more.

Joe Biden’s claim that he “can’t do much right now” is also a lie, because as we’ve said, he can do several things including increasing American production, but he simply doesn’t want to because it’s been his explicit policy since he came into the office to attack the energy industry to comply with the radical climate agenda. It’s him throwing up his hands now and pretending the failure isn’t his. No one in the office should ever say that he “can’t do much right now.” If he gave a darn, he would be doing everything he could to work on it, starting with talking with American producers to increase production.

Sen. Ted Cruz (R-TX) busted Biden’s big lie and his surrender of all responsibility while he was in Texas.

As Cruz has noted, we were a net exporter before Biden came in and no one has done more to throw us under the bus on the issue than Joe Biden.

The only thing that one can conclude if Biden doesn’t want to increase our production is that he doesn’t care either about the pain that Americans are suffering and will suffer, plus he has no regard for our national security. Because there’s no other explanation for being so rabidly against doing what is in the best interest of the nation.