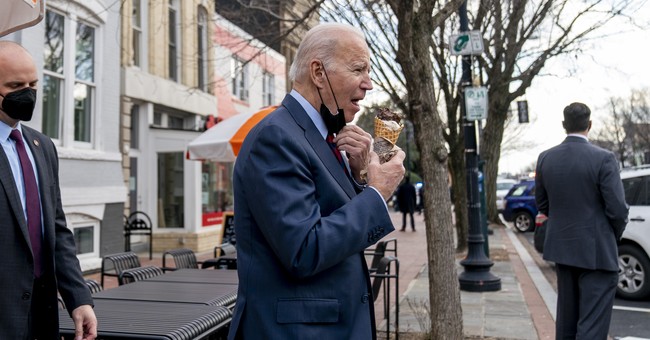 According to a scoop (I can’t use the term anymore without mental images of Joey SoftServe with face buried in a waffle cone) by the Wall Street Journal, the Biden White House has tried to arrange calls with Saudi Crown Prince Mohammed bin Salman and the U.A.E.’s Sheikh Mohammed bin Zayed al Nahyan to convince them to pump more oil. U.S. gas prices are skyrocketing, we’re nearing hyperinflation, and only the dimmest bulbs in the media are going to believe that Russia invading Ukraine has diddly squat to do with either.

Saudi Crown Prince Mohammed bin Salman and the U.A.E.’s Sheikh Mohammed bin Zayed al Nahyan both declined U.S. requests to speak to Mr. Biden in recent weeks, the officials said, as Saudi and Emirati officials have become more vocal in recent weeks in their criticism of American policy in the Gulf.

“There was some expectation of a phone call, but it didn’t happen,” said a U.S. official of the planned discussion between the Saudi Prince Mohammed and Mr. Biden. “It was part of turning on the spigot [of Saudi oil].”

Mr. Biden did speak with Prince Mohammed’s 86-year-old father, King Salman, on Feb. 9, when the two men reiterated their countries’ longstanding partnership. The U.A.E.’s Ministry of Foreign Affairs said the call between Mr. Biden and Sheikh Mohammed would be rescheduled.

The Saudis have signaled that their relationship with Washington has deteriorated under the Biden administration, and they want more support for their intervention in Yemen’s civil war, help with their own civilian nuclear program as Iran’s moves ahead, and legal immunity for Prince Mohammed in the U.S., Saudi officials said. The crown prince faces multiple lawsuits in the U.S., including over the killing of journalist Jamal Khashoggi in 2018.

The Emiratis share Saudi concerns about the restrained U.S. response to recent missile strikes by Iran-backed Houthi militants in Yemen against the U.A.E. and Saudi Arabia, officials said. Both governments are also concerned about the revival of the Iran nuclear deal, which doesn’t address other security concerns of theirs and has entered the final stages of negotiations in recent weeks.

The White House has worked to repair relations with two key Middle Eastern countries it needs on its side as oil prices push over $130 a barrel for the first time in almost 14 years. Saudi Arabia and the U.A.E. are the only two major oil producers that can pump millions of more barrels of more oil–a capacity that, if used, could help calm the crude market at a time when American gasoline prices are at high levels.

If you want to see what kind of a brain trust runs our diplomacy, McGurk was sleeping with a W.S.J. reporter while failing to negotiate a Status of Forces Agreement with Iraq. He also was screwing his way through the female talent at the U.S. Embassy in Baghdad (I suppose I should commend the fact that his liaisons were with women, that is something of an accomplishment in the State Department). Along the way, he apparently ended up starring in an inadvertent porn flick recorded by a rooftop security camera at the embassy; you can read the details in Vote No On The McGurk Nomination.

I don’t think there has been a time in my life where a President of the United States could make a call and the recipient just refused to take it. Something like this might have happened with Jimmy Carter during the Arab Oil Embargo, but I don’t think so.

There isn’t much of a surprise here. Joey SoftServe has been driven by events at every step of the way instead of managing them. Being run out of Afghanistan, leaving behind American citizens and billions of dollars in equipment was, I fear, just the opening act. All through the Ukraine mess, Biden has been missing in action. Whenever the going gets tough, he grabs an ice cream cone and heads for Delaware. If it weren’t for the Germans and French-I can’t believe I’m writing this-there would be no Western leadership dealing with Ukraine.

What is becoming obvious is that the incompetence of this bunch is beginning to resemble a 1970s pop song.