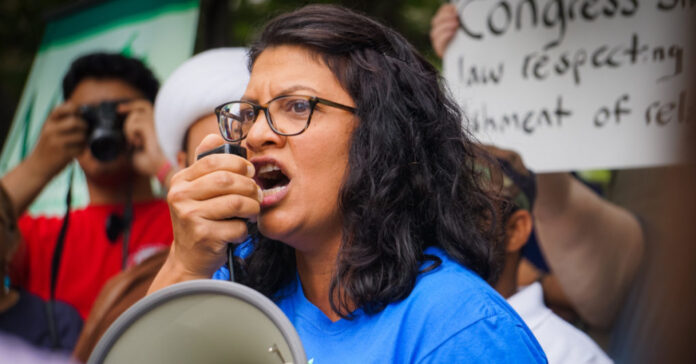 The members of the Squad prove that they really are not part of the Democratic Party. Biden just called for unity (again) during the State of the Union. And here’s Rashida Tlaib running her mouth immediately following the address.

Let’s get one thing straight. There’s only one person who should be making an official remark of the SOTU, which is someone carefully chosen by the opposing party. Since the Democrats are in power, the Republican Party gets to make the remarks – and that honor was given to Governor Kim Reynolds of Iowa.

Tlaib likes to hear the sound of her own voice, so she wanted to make her own rebuttal. And everything that came out of her mouth proved that she wasn’t even listening to what Biden said. It shows that she’s ignorant and that she’s an enemy of the country.

If there’s going to be any talk of impeachment, it needs to start with Tlaib. This U.S. Representative from Michigan is not helping the people who helped to get her into office. She cares about one thing – destroying the United States. And it’s been obvious in her comments since Biden gave his speech a week ago.

Tlaib has been touting all of the wins of the White House…what wins? Well, that’s something we’ve been asking ourselves. This is all a way for Americans to question themselves so that the red wave doesn’t come for the Democrats.

Tlaib is either scared, ignorant, or a combination of both.

The Representative has been in stark contrast with what Biden said during his address.

Let’s start with police reform. Biden made sure to mention several times that the plan is to FUND the police, not to defund. And in case Tlaib didn’t hear that correctly, Nancy Pelosi has made sure to clarify that defunding the police is not in line with the Democratic Party.

Tlaib doesn’t really care, though. She makes things up to suit her progressive agenda. She commented that “We can’t police away homelessness, poverty or our mental health crisis in our country. Care, not more criminalization is how we ensure lasting safety for all.”

She makes it sound as though each and every murder, rape, and assault committed in the country is due to someone who is homeless and/or mentally ill – and that’s simply not the case.

Tlaib has drawn a line in the sand. She’s not a Democrat. She’s not in line with what the president wants for the country.

Yet, somehow, that’s not what Tlaib heard. That means that we have to be extremely cautious of anything that the progressive Squad member has to say. She’s trying to hurt the country. She’s trying to tear Americans apart from one another.

The Michigan Representative announced that her remarks of the SOTU would be on behalf of the Working Families Party. Those remarks were not necessary – and she received a significant amount of slack from both Republicans and Democrats.

It’s just another way to show that the Democrats are divided.

Biden says unity and Tlaib hears something that tells her that she needs to pull at the string to create even more division.

If Tlaib can’t even stand behind a president from her own party, she might as well join the Working Families Party officially and stop calling herself a Democrat. That title is reserved for people who actually believe in democracy.