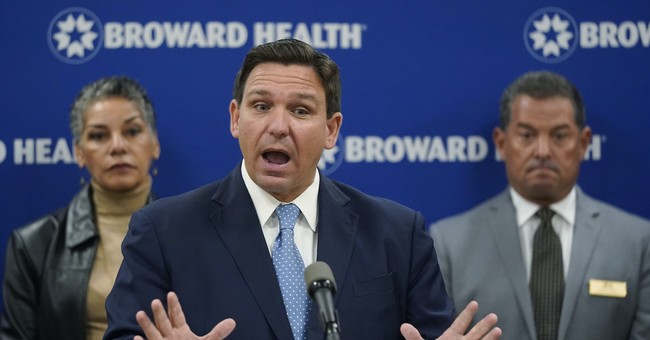 The debate over the falsely labeled “don’t say gay” bill in Florida has taken center stage over the last few weeks. That’s led to more than a few instances of lunacy being demonstrated, including this cringe-worthy performance from Florida Democrats shouting “gay” over and over as some kind of supposed own.

Do these people seem stable to you?

As you would expect, the press has not been any better. Instead of actually reading the language of the bill and asking questions that pertain to the text, Florida’s left-leaning news outlets have rushed to push the leftwing “don’t say gay” disinformation. Reporters have consistently tried to press Gov. Ron DeSantis on the matter, falsely framing the debate using misleading assertions.

That happened again on Monday, and DeSantis was having none of it.

You’d think reporters would start getting wise to the fact that DeSantis is not going to let them get away with their partisan games. The “critics say” trope is no better than the “experts say” trope. It’s a cheap attempt by a journalist to avoid having to do any real research into the topic they are inquiring about. In this case, the reporter obviously had an agenda, and he was there to push it, not garner actual information.

Instead of letting him, DeSantis immediately interjected, pressing the reporter multiple times to state what the bill actually says. That’s important because a simple reading of the seven-page piece of legislation would reveal that the word “gay” is never mentioned in it. Further, it does not ban a teacher from talking about their family, regardless of their personal sexual orientation.

Rather, what it does is stop the grooming of children by radical teachers who want to push far-left ideas of gender and sexual ideology on small children. But even then, the bill does not single those things out. It simply disallows all teaching of such subjects given that is not the place of a public school.

To be frank, there is no situation where a six-year-old should ever be taught by a school teacher about sexual orientation and transgenderism. Those are subjects for parents to tackle, not taxpayer-funded educators. And while I understand the concerns of some (though, I don’t agree with them), I do not see the justification to oppose this bill.

DeSantis understands what time it is politically speaking, and he also understands what it means to fight for what is right even in the face of headwinds. Many Republicans have wilted in the face of these debates, and it’s impressive to see one go right at the false narratives being spun. There is no “don’t say gay” bill. That’s is a fact, and any reporter pushing such nonsense is showing themselves to be unworthy of any credibility.