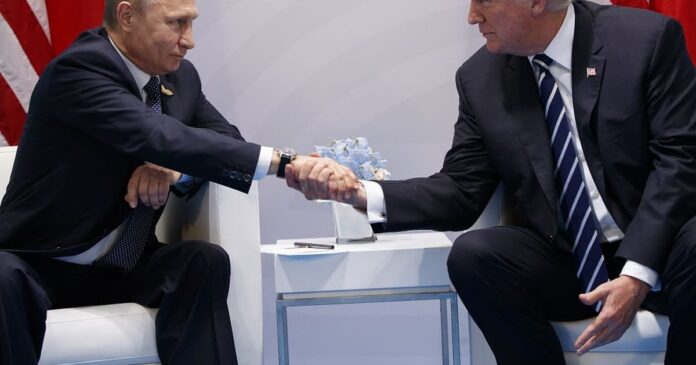 The headline pretty much tells the story: We know Donald Trump called one of his friends, pro golfer John Daly, on Friday. We also know Trump told Daly that as president, he warned Russia’s Vladimir Putin the U.S. military would hit Moscow if Putin did “it” — presumably, if Russia invaded Ukraine, given the timing of the phone call.

But before we get too far down the tracks, what we don’t know is if Trump actually told Putin he’d bomb Moscow. Either way, the story is a perfect illustration of the stark contrast between Donald J. Trump Sr. and Joseph Robinette Biden Jr., and their respective views and handling of U.S. foreign policy.

Assuming Trump did in fact threaten Putin with a strike on Moscow, whether or not he would have followed through on that threat would have brought about an entirely different discussion.

Anyway, as reported by Daily Mail, Trump told Daly that while he and Putin enjoyed a good relationship, he warned the Russian dictator, straight up, behind closed doors: “I’m telling you, Vladimir, if you do it, we’re going to strike Moscow hard. We’re going to make our way to Moscow.”

They’re all saying oh he’s a nuclear power, it’s like they’re afraid of him. You know, he was a friend of mine, I got along great with him. I say, ‘Vladimir, if you do it, we’re hitting Moscow. We’re going to hit Moscow.’

They were all talking about it, “Why didn’t he do this during the last four years?” Because he knew he couldn’t.

A couple of things, here. First, various American presidents throughout history have confused “getting along with,” or “having a friendship with,” with an actual deterrent to the world’s bad guys. Infamously, British Prime Minister Neville Chamberlain, after signing the Munich Pact with Adolf Hitler’s Nazi Germany on September 29, 1939, returned to Britain and declared “Peace in our time.”

Trump also boasted to Daly that Communist Chinese dictator Xi Jinping was afraid to mess with him, as well, while Trump warned that under Biden, Taiwan will be “next.”

Xi didn’t bother me either. I told him the same thing, that that’ll be next. You know that’s going to be next. Taiwan will be next. You won’t have any computer chips. They’ll blow them off the face of the earth.

Given China’s increasingly ominous rhetoric in respect to Taiwan, I’d be hard pressed to dismiss Trump’s assertion out of hand.

I stand as the only president of 21st Century on whose watch Russia did not invade. Under Bush, Russia invaded Georgia. Under Obama, Russia took Crimea. Under Biden, Russia invaded Ukraine.

I have no doubt Putin made his decision to ruthlessly invade Ukraine after watching pathetic withdrawal from Afghanistan. I was with Putin a lot, I spent a lot of time with him, I got along with him.

It’s a good thing to get along with people, it’s not a bad thing.

“It would have been so easy for me to stop this travesty from happening,” Trump declared. “He understood me; he understood I didn’t play games.”

I’m not sure if Trump counts Xi among his friends, or not, but I am sure that the guy who continues to commit genocide and other atrocities against the minority-Muslim Uyghurs isn’t playing games, but is pursuing what he views as China’s interests.

Well, I think that’s — I saw those comments — you know, another reason why the American people are grateful — the majority of the American people — that President Biden has not taken a page out of his predecessors’ playbook as it relates to global engagement and global leadership, because, certainly, we could be in a different place.

Just like the American people are grateful for the Biden Border Crisis, the Biden Afghanistan Debacle, and the Biden Energy Crisis, reducing your boss to begging Russia, OPEC, and soon-to-be Iran for oil, as he continues to look for ways to further destroy American energy production.

Meanwhile, Vladimir Putin brutally marches on, while Joegoes about being Joe.