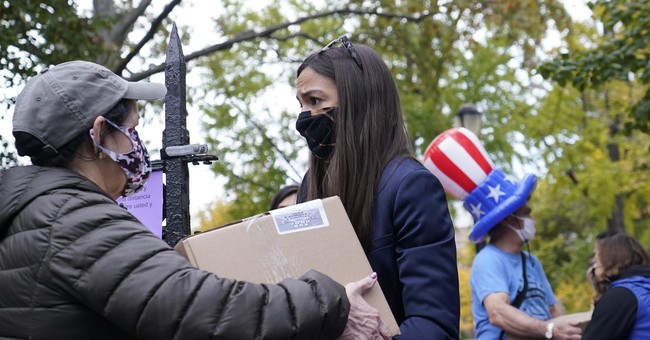 It looks like not everyone is as enamored with everyone’s favorite socialist celebrity. A recent survey revealed that black Americans are not too crazy about Rep. Alexandria Ocasio-Cortez (D-NY). This is no secret to those who understand the political landscape, but it is a fact the progressive crowd would rather be kept under the radar for obvious reasons.

Echelon Insights released the results of a poll asking respondents a series of demographic and policy questions to ascertain what a prime congressional candidate would look like for people of both parties. One of the questions asked participants if they preferred a candidate backed by President Joe Biden or AOC. Overall, those supported by Biden received 14 percent more support than others. Candidates who AOC endorsed received 12 percent less support than others.

Among black Democrats, a nod from Biden helped candidates by 25 percent. But for those who AOC supported, they received 24 percent less support than other candidates.

As stated previously, these results should not be shocking. Black Americans are not far-left socialist types, so it makes sense they would be turned off by people like AOC. A Pew Research poll conducted in 2020 revealed that 81 percent of black Americans identify as “moderate” or “conservative.” While about 90 percent of blacks support Democratic candidates, they do not support radical Marxist types.

This is a rather embarrassing reality for the progressive crowd, which claims to champion the needs of the black community more than anyone else. These are the folks who loudly proclaim their support for far-leftist groups like the global Black Lives Matter organization. They are the ones who don their white capes and virtue signal on social media about how much they love people of color every chance they get.

Nevertheless, black folks just aren’t buying what they’re selling. The mayor’s race in New York City is proof positive that when presented with a moderate candidate like Mayor Eric Adams – who used to be a Republican – seeking to address issues like high crime rates, they will kick a progressive candidate down the stairs to support that person.

The far-left will likely never win over a large swath of the black electorate. This means conservative candidates have only moderates as their competition. If they want to start making inroads among black voters, they have a uphill battle – but it’s a battle that can be won as long as the GOP is willing to play the long game.