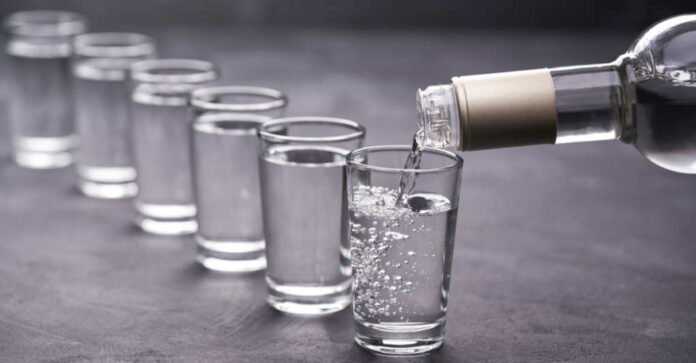 Whether you like them shaken or stirred, dirty or dry, there’s one thing that should be missing from your vodka martini: a Russian brand.

If you’ve gone into a liquor store recently, you’ve likely noticed an empty spot where all of the Russian brands typically sit. It’s a way to strike back at Vladimir Putin and the rest of Russia.

Stores are choosing to place emphasis on other vodka – those from Poland, France, Sweden – literally anywhere except for the communist nation. 10 U.S. states have even gone as far as restricting the sales of Russian-made and branded vodkas.

It’s hardly going to hurt Putin. While many people believe that Russia and vodka are synonymous, their exports of the liquor are not what they used to be – it’s only estimated to be about $150 million a year. Still, it will send a clear message to Russia that they are not being desired in other parts of the world.

We have to be more concerned about what Russia’s top exports really are – crude petroleum is an export business of approximately $120 billion and refined petroleum is another $66 billion.

The issue about where the world will get their petroleum from if Russia decides to get nasty is another article for another day. Right now, we’re talking about martinis.

European countries and supermarkets are making some changes to their shelves, too.

Many places feel helpless in terms of what they can do about Russia choosing to invade Ukraine. The only way that they can show Putin that he’s wrong is by banning the Russian vodka.

Various government-controlled alcohol monopolies were the first to ban any liquor that came from Russia – including Finland and Sweden. Norway was quick to follow suit.

Supermarket brands in many of the Baltic states, such as those in Latvia, Lithuania, and Estonia, decided that they weren’t going to stop at vodka. They actually halted all goods from Russia – and that is sure to cause Russia at least a little bit of financial pain.

Ukraine should feel overjoyed that they have support from all over the world.

A historic liquor shop in Rome by the name of Bernabei, earns approximately 25 percent of its revenue through Russian-made liquor. Even they have chosen to pledge their solidarity to Ukraine by banning the Russian spirits.

The point of all of this is not to necessarily have a financial impact on Russia. Instead, it’s a way of showing Putin that he’s not getting support – not from the bars, the liquor stores, or even the governments across the globe.

Back in the days of Ivan the Terrible, Russia made almost all of their revenue from vodka. Those days are over. Most vodka is produced in other parts of the world – and Sweden is the top exporter.

IWSR, an organization dedicated to identifying beverage alcohol trends around the world weighs in on the boycotts that we’re seeing. COO Emily Neill explains “boycotts of Russian vodka brands will have a fairly minimal impact on Russian vodka producers. Therefore any significant impact is more likely to be symbolic.”

The good news is that symbolism is going to pay off big for some of the other vodka brands. Since the Russian brands have essentially been cut out of the equation, other countries will see an uptick in their vodka export sales.

There aren’t too many ways to throw shade at Russia, but there are ways to stand behind Ukraine. Say no to Russian vodka and other Russian-made products. And, if you’re feeling particularly generous, check out Airbnb properties in Kyiv. Rent them so that the owners make some money – just message them to let them know that you won’t actually be checking in.

If we all band together, Russia will realize that they’re alone in this war that they’ve started.