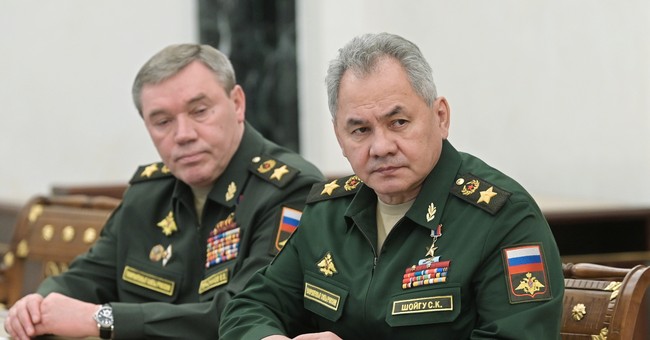 Imagine you are a ruthless despot who miscalculated in launching an unprovoked war against a small and non-threatening neighbor, and the military operation is going pear-shaped. Not only is the military operation bleeding you to the tune of a couple of hundred men per day (Russia Releases the First Official Casualty Count From Its Ukraine Adventure), and a dozen or so countries sending large quantities of very capable weapons to the country you invaded, Western sanctions are throttling your country. More importantly, the oligarchs who keep you in power are seeing their personal balance sheets hammered. Your ability to find a way out is limited because you’ve successively upped the ante until now you need total possession of the country you attacked and the eradication of its government to claim you won. You are also grimly aware that a strongman is only a strongman as long as he wins.

What do you do?

Well, if you are Vladimir Putin, you try to gaslight the world into believing that you justifiably attacked Ukraine because they were “unfriendly” to you and that the sanctions slapped on you by governmental and private actors are irrational, unfair, and uncalled for.

)Russian President Vladimir Putin called Friday for the “normalization” of relations with other states, saying Moscow has “absolutely no ill intentions with regard to our neighbors.”

Speaking via video link at a ceremony raising the Russian flag on a Kaliningrad ferry, Putin called for global coordination, even as Russia’s invasion of Ukraine entered its second week.

“I think that everyone should think about normalizing relations and cooperating normally,” he said.

He said Russia saw no need to aggravate tensions with other countries, claiming that Moscow’s actions in Ukraine came only “in response to unfriendly actions toward Russia.”

“There is no need to escalate the situation, impose restrictions. We fulfill all obligations,” he said. “If someone does not want to cooperate with us within the framework of single cooperation, and by doing so harms themselves, they will, of course, harm us, too.”

Mind you, this all takes place in the context of a phone call with French President Macron where Putin told him he intended to pursue the war in Ukraine until the last dog is dead (see After Putin Phone Call, Macron Fears ‘the Worst Is yet to Come’ in Russia’s Invasion of Ukraine). And where he also claimed that the imagery we’re seeing of devastated Ukrainian cities and dead Ukrainian children is just “disinformation.” (Sounds like he’s taking lessons from Fauci and the Branch COVIDians in calling anything he doesn’t like “disinformation.”)

My assessment is that this plea is very much like the rather bizarre speech he gave a week ago where he encouraged the Ukrainian military to forget about their oath of allegiance and mutiny (Putin Shows Signs of Panic, as He Calls on Ukraine Military to Mutiny). It is a sign that the sanctions imposed on Russian have hit in a way he did not anticipate and that he’s trying to find a way of getting out from under them. The timing indicates that his financial gurus have evaluated the situation and determined that it will be very difficult for Russia to operate with these sanctions in place. It is also a sign that he’s not about to enter into a major economic partnership with China and throw off the dollar as the international reserve currency.

An acquaintance of mine was on CNN tonight. He believes that the longer this war lasts, the greater the chance Ukraine will “win.”

I have to admit I’m doubtful, but if Putin is already trying to get out from under sanctions after only a small scale military success, it is a sign that things are going much worse than we know. In the meantime, we can relax and enjoy a classic song by War.