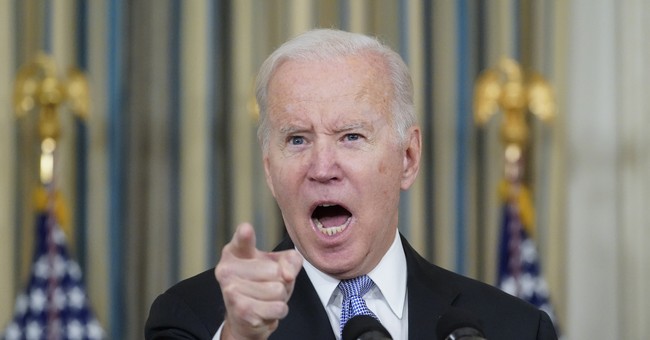 Joe Biden’s Build Back Better bill went down in flames months ago, but he was still trying to push it during his State of the Union address, just with a slightly new name “Building America Better” (as though Americans couldn’t tell it was the same warmed-over stuff that went down in defeat).

The main reason it failed was it was a spend-arama that Sen. Joe Manchin (D-WV) and Sen. Kyrsten Sinema (D-AZ) couldn’t go along with. You can’t put lipstick on a pig and make it look better but that’s exactly what Joe Biden is trying to do.

But what he told interviewer Heather Cox Richardson as to why people should go along with him was quietly hilarious. He took a swipe at Joe Manchin in the process.

‘The Build Back Better piece. What people don’t realize, mainly because one senator from West Virginia talks about how it’s all social spending – well, you know, all the money in Build Back Better provisions, there is about $500 billion of it is for the environment,’ he said in the Substack interview.

‘Five hundred billion is for the environment. But the other parts are for the best way to deal with people who have been getting the short end of the stick, as they say, for a long time,’ Biden told the Boston College historian.

Imagine telling people who are being crushed by Bideninflation that hey, we’re spending a lot of it on the environment. Biden is so clueless, he doesn’t get that doesn’t help, it just makes things worse. Plus, if he thinks that continuing to take swipes at Manchin and singling him out is going to help convince him, he’s already found out that didn’t work and it ticked Manchin off. Maybe he should be wondering why Manchin was sitting with the Republicans during the SOTU? Unlike Biden, Manchin is focused on not making inflation worse. Biden just wants to keep spending more, not seeming to care or understand that’s the primary cause of inflation.

The interview went sideways quickly. Biden said he couldn’t quite understand how we had gotten to the place where Vladimir Putin was invading…Russia.

This is at least the third time where he can’t seem to keep the players in the drama straight, including where he called the Ukrainians “Iranians” during his State of the Union and you could see Kamala Harris behind him silently mouthing “Ukrainians.”
Maybe we’ve gotten to this place with Putin because once again we had a weak Democrat in the White House who Putin knew would be reticent to do anything to hold him back. But that would take some reflection and grappling with reality for Biden to realize that.

Biden also exaggerated some aspects of his life as he frequently does during the interview. He talked about his “involvement in the civil rights movement” yet again.

He has called himself out in the past on this stretch of reality.

Yet he still keeps saying it.

Biden further told Richardson, who is a real professor, “You make me miss being a professor at Penn. When I left the Vice Presidency, I had a chance to do a number of things. But I took a professorship at the University of Pennsylvania on presidential politics and history. So I envy you.” Biden further said, “I really enjoyed teaching and writing.”

As the child of two professors who worked hard to earn those titles, this claim ticks me off. “Professor” is a title you have to earn, through teaching, writing, and scholarship. He taught no regular classes. This is what his “teaching” comprised — for which he got about $900,000:

His public appearances over that two-year stretch included three Q-and-As with Penn president Amy Gutmann, panel discussions on immigration and cancer, a talk about his book, a lecture to a Wharton class, and public conversations with former Mexico President Felipe Calderon and former United Kingdom Deputy Prime Minister Nick Clegg, according to a tally by the student newspaper, the Daily Pennsylvanian. Those events, of course, don’t include more private work Biden may have done on the school’s behalf.

Hardly a “professor” of the type he seemed to be trying to convey. But at least he didn’t claim that he drove an 18-wheeler. This time.