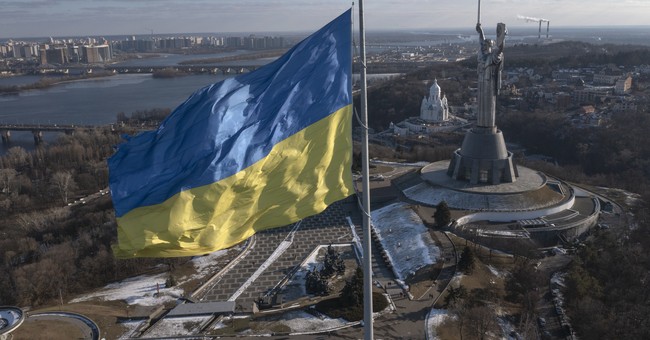 (The opinions expressed in this op-ed are those of the writer and do not necessarily represent the views of RedState.com.)

I have long considered myself a libertarian. For the last several decades, I have felt that the US has been involved in numerous wars and conflicts in which we should have never gotten involved. Whether it was Bosnia, Iraq, or even any action in Afghanistan post the death of Bin Laden, The US’s goals of nation-building and “spreading democracy” have often cost our nation more than any positive results that may have come from those actions. Needless to say, I do not think we need to be unnecessarily involved in another international conflict.

When it comes to the events in Ukraine, I certainly want to avoid the presence of US troops in a conflict that could place the world on the brink of World War III.

When the Berlin Wall fell in 1989, heralding the beginning of the collapse of the Soviet Union, Ukraine found itself in an interesting predicament: It now was an independent country with a cache of nuclear weapons so large they could exterminate the majority of the populations of both the United States and Russia. For several years, this placed Ukraine, Russia, and the West in a quandary. What do you do with a fledgling nation, absent long-term stability, and enough nuclear firepower to destroy half the world? Well, get them to join the Treaty on Non-Proliferation of Nuclear Weapons (NPT), of course.

In 1991, Ukraine declared its independence and committed to joining the NPT and turning over its nearly four thousand nuclear weapons to Russia by the end of 1994.

And Ukraine stayed true to its word. On the 5th of December of that year, Ukraine, Russia, the United States, and the United Kingdom signed the “Memorandum on Security Assurances in Connection with Ukraine’s Assession to the Treaty on Non-Proliferation of Nuclear Weapons.” Essentially, to agree to denuclearization and the relinquishing of Ukraine’s inherited nuclear arsenal, Ukraine wanted some assurances, notably that their sovereignty was to be respected by all of the parties of the agreement, and defended should any threat to that sovereignty were to rise.

In exchange for joining the NPT, Ukraine wanted the following assurances:

1. The Russian Federation, the United Kingdom of Great Britain and Northern Ireland and the United States of America reaffirm their commitment to Ukraine, in accordance with the principles of the Final Act of the Conference on Security and Cooperation in Europe, to respect the independence and sovereignty and the existing borders of Ukraine;

2. The Russian Federation, the United Kingdom of Great Britain and Northern Ireland and the United States of America reaffirm their obligation to refrain from the threat or use of force against the territorial integrity or political independence of Ukraine, and that none of their weapons will ever be used against Ukraine except in self-defence or otherwise in accordance with the Charter of the United Nations;

3. The Russian Federation, the United Kingdom of Great Britain and Northern Ireland and the United States of America reaffirm their commitment to Ukraine, in accordance with the principles of the Final Act of the Conference on Security and Cooperation in Europe, to refrain from economic coercion designed to subordinate to their own interest the exercise by Ukraine of the rights inherent in its sovereignty and thus to secure advantages of any kind;

4. The Russian Federation, the United Kingdom of Great Britain and Northern Ireland and the United States of America reaffirm their commitment to seek immediate United Nations Security Council action to provide assistance to Ukraine, as a non-nuclear-weapon State party to the Treaty on the Non-Proliferation of Nuclear Weapons, if Ukraine should become a victim of an act of aggression or an object of a threat of aggression in which nuclear weapons are used;

5. The Russian Federation, the United Kingdom of Great Britain and Northern Ireland and the United States of America reaffirm, in the case of Ukraine, their commitment not to use nuclear weapons against any non-nuclear-weapon State party to the Treaty on the Non-Proliferation of Nuclear Weapons, except in the case of an attack on themselves, their territories or dependent territories, their armed forces, or their allies, by such a State in association or alliance with a nuclear-weapon State;

6. Ukraine, the Russian Federation, the United Kingdom of Great Britain and Northern Ireland and the United States of America will consult in the event a situation arises that raises a question concerning these commitments.

This agreement was signed by the various leaders of the four participating nations including Boris Yeltsin of Russia and President Bill Clinton of the United States, thus committing the United States to the defense of the sovereignty of Ukraine, both from US aggression, the aggression of any other participating country, as well as the aggression of any country which threatens the sovereignty of Ukraine.

Why is this important? Well, to start, Russia would likely not have taken any of the actions against Ukraine over the last decade if Ukraine was armed with nuclear weapons. Not only is this opinion confirmed by the fact some of Russia’s actions in the last week have been against sites that potentially have held nuclear armaments which were not relinquished to Russia as part of the 1994 agreement, but also in the fact that Russia has threatened nuclear action against anyone who comes to the aid of Ukraine, including the US and UK. The unprovoked Russian aggression in Ukraine has resulted in many disasters warned about by previous foreign policy experts, none more so than John J. Mearsheimer in a 1993 article published by the Council on Foreign Relations.

In that article entitled, “The Case for a Ukrainian Nuclear Deterrent,” Mearsheimer points out that absent that deterrent, Russia will likely seek aggression against the country, leading to greater conflict and potentially war, with the rest of Europe.

” A war between Russia and Ukraine would be a disaster. Great power wars are very costly and dangerous, causing massive loss of live and worldwide turmoil, and possibly spreading to involve other countries. The likely result of that war – Russia’s reconquest of Ukraine- would injure prospects for peace throughout Europe. It would increase the danger of a Russian-German collision, and sharply intensify the security competition across the continent.

Now listen to this:

“A conventional war between Russia and Ukraine would entail vast military casualties and the possible murder of many thousands of civilians. Russia and Ukrainians have a history of mutual enmity, this hostility, combined with the intermixing of their populations, raises the possibility of that war between them could entail Bosnian-style ethnic cleansing and mass murder. This war could produce millions of refugees, clamoring at the borders of Western Europe.

In addition, there are 14 operational nuclear reactors in Ukraine that might produce new Chernobyls if left unattended or attacked during a conventional war. The consequences of such a war would dwarf the death and suffering in the Balkans, where more than 50,000 people have died since the summer of 1991. Needless to say, if nuclear weapons were used the costs would be immeasurable.

There is also the threat of escalation beyond the borders of Russia and Ukraine. For example, the Russians might decide to reconquer other parts of the former Soviet Union in the midst of war, or might try to take back some of Eastern Europe. Poland and Belarus might join forces with Russia against Ukraine or gang up with Ukraine to prevent Russian resurgence.”

Almost prophetic. In fact, hundreds of thousands of Ukrainian refugees have fled the country, a Ukrainian Nuclear Plant is on fire from Russian Attacks, and Polish citizens are crossing the border in Ukraine to fight the Russians.

“Ukrainian nuclear weapons are the only reliable deterrent to Russian aggression.”

The point of this is that these very threats were known at the time of the signing of the Memorandum, and were very much the motivation of Ukrainian officials in demanding the assurances they did. Russia is clearly in violation of the agreement, placing both the US and the UK in a contractual obligation to take action against Russia for doing so.

I don’t want another war, but US National Security demands not only that we defend against the aggression of those who attack us, but that we defend the obligations to which various treaties have committed us. We signed that agreement hoping for peace, and we got peace for more than 15 years. Only since the total lack of enforcement of the agreement by the Obama Administration and now the Biden Administration, has Putin become emboldened to take the action he has. It is time the US rises to the occasion, even with threats of the use of nuclear weapons, to tell the Russians to stick to the treaty. Our failure to enforce that treaty makes us no better than the Russians.