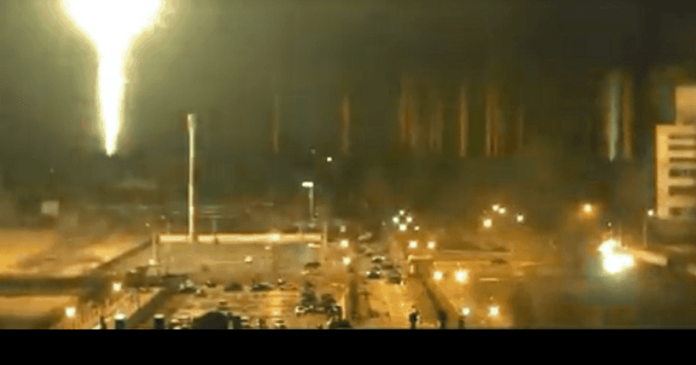 There are a lot of problematic issues that can spin out of control with the war in Ukraine now, most notably that it could spread to involve other countries. We saw the “oopsie” of the Belarus leader standing in front of an attack map, indicating the Russians might want to invade Moldova. The other problem would be if something is done which would invoke NATO protections, which is why the U.S. is not sending in troops or setting up a “no-fly zone” over Ukraine, although they are providing weapons.

But Russia put another one in play on Thursday, according to a breaking report out of Ukraine: the possibility of a nuclear disaster.

The Russians have attacked the Zaporizhzhia nuclear power plant, the largest such plant in Ukraine. It was on fire after the attack, according to the mayor of the nearby town of Energodar, Dmytro Orlov. Ukrainian authorities have said that the Russians have been trying to seize the plant and had tanks in the town.

“As a result of continuous enemy shelling of buildings and units of the largest nuclear power plant in Europe, the Zaporizhzhia nuclear power plant is on fire,” Orlov said on his Telegram channel, citing what he called a threat to world security. He did not give details.

While Reuters said they couldn’t verify it, there were multiple reports of a fire at the plant and a video from Nexta media claiming to show the attack. The fire at the moment appears to be in an administrative building, according to reports.

That’s more than a little problematic.

Ukraine’s foreign minister has called on the Russians to stop the attack.

“Russian army is firing from all sides upon Zaporizhzhia NPP, the largest nuclear power plant in Europe. Fire has already broken out. If it blows up, it will be 10 times larger than Chornobyl! Russians must IMMEDIATELY cease the fire, allow firefighters, establish a security zone!” the foreign minister wrote.