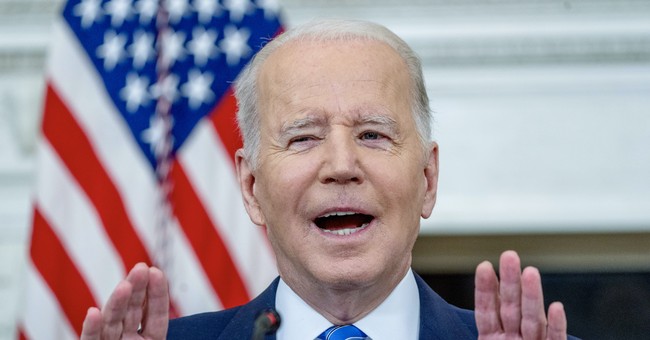 We’ve seen that confusion is Joe Biden’s constant state of being. That would be okay if he were old Grandpa Joe, retired and playing with the grandkids, but not so okay if he is occupying the highest office in the land, with the responsibility of protecting America and Americans.

Biden held a cabinet meeting on Thursday, during which he said they would be “discussing additional sanctions on Russian oligarchs, our plans to lower costs for Americans, our unity agenda, and more.” You knew it was going to be a question — when he said “unity agenda” — since he’s been anything but unifying throughout his campaign and during his time in office.

Former CBS News correspondent Mark Knoller noted it was only Biden’s fourth cabinet meeting, far fewer than most other people at this time in his term.

The press was there for a part of the meeting. At least until Biden had a big gaffe, and then the press got tossed.

Biden can’t seem to keep the players in the drama straight. During his SOTU address, he referred to Ukrainians as “Iranians.” You could even see the cringe moment with Kamala Harris behind him, desperately mouthing, “Ukrainians,” with “oh, my” written all over her face.

Then Biden claimed on Thursday it was Americans who were “confused out there.”

Sorry, Joe, it isn’t Americans who are confused, it’s you. This is just a continuing pattern of insulting Americans for having the sense to not be enamored of him, telling the truth about how bad they think he is in polls, or questioning his positions. As we previously reported, in November he said Americans weren’t getting it because they had “psychological scars” from the pandemic. Then, this past week, Biden indicated that people didn’t get what an awesome job he was doing because they were “psychologically” unable to feel happy. This latest remark is another version of that same dismissal of American opinion.

At some point, the White House staff figured that this was a case of diminishing returns, the longer that the press was there. So they moved – in that rude way they have – to throw the press out.

“Will you ban Russian oil?’ a reporter yelled, as the staff started trying to shove them out the door.

“No, he didn’t,” “He didn’t respond to anything,” the reporters responded.

The answer is yes: Biden — while claiming he’s been tough on Russia and is making Putin a pariah — is still paying for Russian oil. Indeed, he may not want to just cut it off immediately because it could have a bad effect on the U.S., where prices are already being driven higher by his idiotic energy policies. He’s the one that made us more reliant on them by increasing the amount of Russian oil.

But at least he could say I’m going to work to replace it with increases in our own production. But he wouldn’t because he’s against our own production, an insane position to take and one that, as we can see, is harmful to national security. His own press secretary messed up the response to that question and he doesn’t dare try to answer it, because they know they have no real answer.