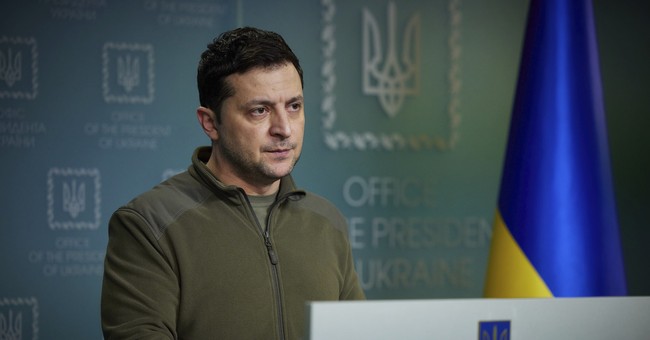 Centuries ago, Shakespeare wrote, “Be not afraid of greatness. Some are born great, some achieve greatness, and others have greatness thrust upon them.” Since the Russian war on Ukraine began, Zelensky has repeatedly demonstrated greatness in leadership. In Wednesday’s speech, he topped even himself. Find excerpts of it below. [translation taken from the video’s captions.]

Yesterday morning on Freedom Square we were all Kharkiv residents. Then the enemy destroyed us all by striking at residential buildings in Borodyanka. We were all bombed in Kyiv last night. And we all died again in Babyn Yar — in a missile strike.

Although the whole world promises constantly “never again,” for any normal person who knows history, Babyn Yar is a special place of Kyiv. A special part of history. A special part of Europe. A place of prayer. A place of remembrance for the hundred thousand people killed by the Nazis. The place of old Kyiv cemeteries. Who should you be to make it a target for missiles? You are killing Holocaust victims for the second time.

Zelensky next detailed how being disrespect of Babyn Yar was nothing new for Russia.

During the Soviet era, a TV center was built on the bones there and also a sports complex. Outbuildings. They built a park there. To erase the true history of Babyn Yar. But why was it bombed? This is beyond humanity. Such a missile strike shows that, for many people in Russia, our Kyiv is completely foreign. They know nothing about our capital. About our history. But they have an order to erase our history. Erase our country. Erase us all.

As Zelensky further noted, this was not the first sign of open disrespect for Judaism Russia has shown in this war.

I am now addressing all the Jews of the world — don’t you see what is happening? That is why it is very important that millions of Jews around the world do not remain silent right now. Nazism is born in silence. So, shout about the killings of civilians. Shout about the killings of Ukrainians. Last night and tonight, they continued to bomb our cities. Bombs. Missiles. Artillery. Machine guns. Targeting peaceful people. Again. Targeting residential areas. Again. Mariupol. Kharkiv. Kyiv. Zhytomyr. And other cities and towns of Ukraine. This cannot be explained by any human reason. Any reason of God.

What other military facilities threaten Russia? What other “NATO bases”? Saint Sophia Cathedral? Larva? St. Andrew’s Church? Whatever they dream of there — damn them! Because God is with us!

After detailing the European and worldwide response to Russia’s attack, Zelensky brought the war down to its human cost.

Think of this number: almost six thousand Russians, died. Russian military, in six days of war. This is without counting the losses of the enemy last night. Six thousand. To get what? Get Ukraine? It is impossible.

Zelensky concluded his speech with encouraging words to his people.

My dears, the time will come when we will be able to sleep. But it will be after the war. After the victory. In a peaceful country, as we need. Which we have always appreciated. And which we have never destroyed.

I ask all of you to take care of your loved ones. Take care of your brothers-in-arms. I admire you! The whole world admires you. From Hollywood stars to politicians. Today you, Ukrainians, are a symbol of invincibility. A symbol that people in any country can become the best people on earth at any moment.

Glory, indeed. Compare this speech to the feckless meanderings we endured last night in Joe Biden’s SOTU, and it becomes immediately apparent there is no comparison. In the most trying of times, Volodymyr Zelensky is leading, encouraging, and comforting his people in the face of a satanic onslaught. Joe Biden? Not so much.